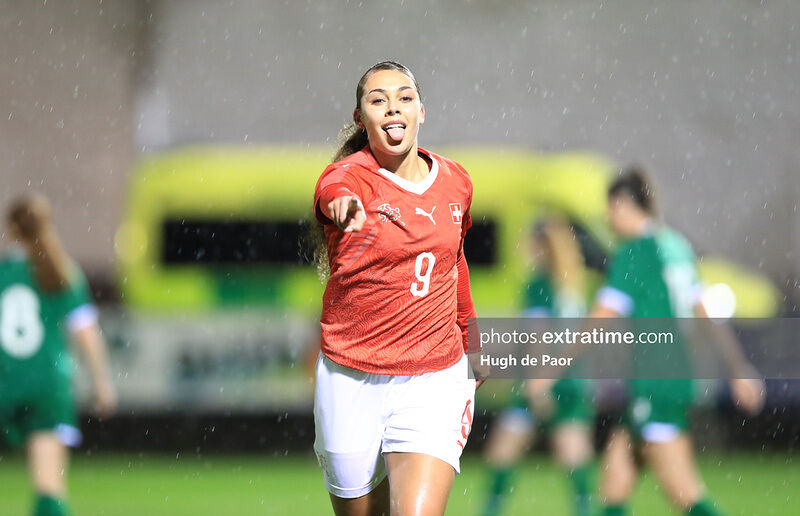 The Republic of Ireland can hold their heads high after a spirited performance against Switzerland in a Women’s Under-19 European qualifier at the Market Fields on Saturday evening.

While the Girls in Green were beaten 3-2 on the night, they can take plenty of confidence from their display against a heavily favoured Swiss side.

Ireland arrived into the came looking to make amends for their 1-0 loss to England on Thursday, and this determination was reflected in their play in the first ten minutes.

In the first three minutes, Rebecca Watkins and Erin McLaughlin drew fouls which won Ireland a set of free-kicks which the failed to create something from.

Switzerland held out during this attacking storm, clearly watching Ireland and figuring out how to break them down.

A Swiss high press yielded possession from the Irish. From that, Alena Bienz chipped the ball into the path of Alayah Pilgrim who was running into the box. The forward, who plays her football with Basel, collected the ball and fired in to make it 1-0 to Switzerland.

Two minutes later the visitors doubled their lead. A ball from Giulia Schlup parted the Irish back four, allowing Pilgrim to run in to face goal. The shot originally hit the far post and everyone carried on, but seconds later the goal was given.

Switzerland’s third was an excellent team goal, which began with the Swiss storming the centre of the pitch to win the back the ball. As soon as Ireland were pressed into giving away possession, the ball was sent back to the Swizz defenders, which gave the team time to adjust their shape.

From her position in defence Caterina Anna Regazzoni then launched a long-ball over the top to a sprinting Aurélie Csillag, who rolled the ball past the Irish keeper.

Ireland responded with a free-kick which was played short to Ellen Molloy. The Wexford Youths forward dashed down the right flank and played a low cross into the box, which needed a hand from Isabel Rutishauser. The ball fell into the path of Emma Bucci and she blasted it in.

The first half fizzled out after this, as the two teams looked to adjust themselves after the frantic opening, which condensed nearly a full game’s worth of drama into thirty minutes.

Ireland began the second half with Therese Kinnevey winning two free-kicks, but neither could be turned into a threatening chance. Molloy plagued the Swiss but her energetic runs were repeatedly undone by the off-side flag. The best chance for the hosts through this period came from the boot of Rebecca Watkins, but her shot was saved.

The introduction of Kerryanne Brown changed the game for Ireland as she tormented Switzerland with her constant press. She was rewarded with an assist after he launched a ball into the box, which was then turned in by Molloy.

Ireland had a few chances late on to equalise, with Emma Doherty having the best of the bunch. Unfortunately, the Girls in Green could not get the crucial touch to force the ball in and secure a point in this qualifier.