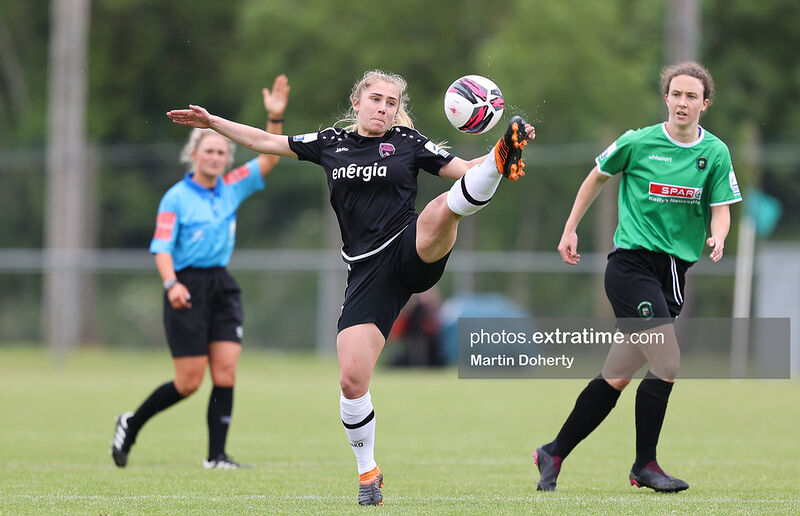 Ellen Molloy of Wexford Youths stretches for the ball ahead of Peamount United's Karen Duggan during their 2-2 league draw at PRL Park on June 5th, 2021. Credit: Martin Doherty (ETPhotos)

The Republic of Ireland will have home advantage when they take on England, Switzerland and Northern Ireland at Markets Field in their three UEFA Women’s Under-19 European Championship qualifiers.

Head Coach Dave Connell has named a 20-player squad of which 15 play in the domestic leagues. Of the 15, 14 have already played in the senior Women’s National League this season. Wexford Youths talisman Ellen Molloy has earned four senior caps for Ireland.

Talking to fai.ie, Connell said he is looking forward to the experience of playing in front of a home crowd.

"We've had fantastic support from the people of Limerick in the past. It is a real football city and it would be great if we could get a big crowd again, as that would mean a lot to the players and spur them on."

He is under no illusions on how tough the challenge will be to emerge from this group and is targeting a good start to get momentum going.

"We are in a tough group with Switzerland top seeds and England being the best second seed, while we recently played Northern Ireland so we know about their qualities. If we can get off to a good start then you never know but that is what we need to focus on."

The squad in full is as follows:

The schedule of games is as follows:

UEFA Women's Under-19 European Championships Round 1