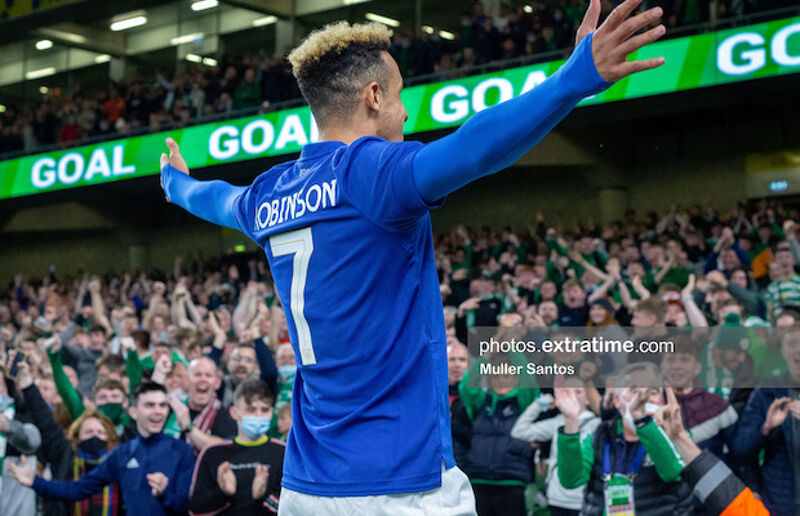 The Republic of Ireland coasted to an emphatic 4-0 victory over Qatar in a one-sided affair at the Aviva Stadium on Tuesday evening.

Callum Robinson stole the headlines for the right reasons once again as he scored a hat-trick to set Ireland on the path to victory before Shane Duffy sealed the result with the fourth of the night.

The win is the biggest of Kenny’s reign so far with the Ireland boss making five changes to the side that won in Azerbaijan.

The Boys in Green – wearing blue to match the kit worn in their first international in honour of the FAI’s centenary this year -  got off to the best possible start as in form forward Robinson found the net once again after his brace in Baku on Saturday.

The West Brom man played a couple of intricate one-twos on the edge of the Qatari box before unleashing a shot which took a fortunate deflection before nestling in the back of the net after four minutes.

He didn’t have long to wait to match his goal tally from Azerbaijan as he struck his second of the night from the penalty spot less than ten minutes later.

Jamie McGrath was brought down in the box and Robinson coolly slotted the spot kick home to double the Irish advantage inside the opening quarter of an hour.

The Irish shape caused difficulties for the Qatar side who posed little threat in the final third of the pitch as the back three of Shane Duffy, John Egan and Andrew Omobamidele were able to marshal the threat without issue.

Robinson almost played an instrumental role in stretching the Irish lead to three just before the break as he chipped a delicate cross to the back post, but Chiedozie Ogbene came inches from his second in as many games, seeing his header bounce back off the crossbar as the Republic of Ireland went in two goals to the good.

Robinson capped off a dream few days playing for the Boys in Green when eight minutes after the restart he finished off his first international hat-trick.

Jeff Hendrick slid the ball through the Qatari defence and Robinson made no mistake in making sure he took home the match ball, scoring for the fifth time in two games.

Ireland made the score-line even more emphatic six minutes later as Shane Duffy rose to meet a Conor Hourihane corner and score his sixth international goal.

The tempo of the game dropped off dramatically after the fourth goal with Ireland content to sit back with the win secured before the hour mark.

Robinson received the biggest cheer of the night upon being subbed off after a stunning international break.

Hendrick almost added a fifth with ten minutes to play as he fizzed an effort just over as the clock ran down and the full-time whistle blew on by far the most stress-free night of Stephen Kenny’s tenure to date.

Caoimhin Kelleher was little more than a spectator on his home debut as the Republic of Ireland cruised to victory.

Kenny’s side certainly didn’t pepper Meshaal Barsham’s goal with shots but were clinical in front of goal to secure back-to-back wins for the first time since March 2019.

After a promising international break from Ireland, the Boys in Green will now turn their attention to the challenge of the visit of Cristiano Ronaldo’s Portugal next month.

Extratime.com player of the match: Callum Robinson (Republic of Ireland)

Aaron Greene on win over Sligo: 'They came up and won here during the season. They walked away like they had won the league so we showed them'