Frankfort humbled Dublin United 5-0 in Drumcondra; the Brewerymen were victors over an under-strength YMCA at Claremont Road.

Shelbourne defeated a disappointing Olympia side; and Bohs also won comfortably versus Jacobs. Dublin United already look to be this season’s cellar-dwellers.

The three big guns all registered 3-1 victories. None were as impressive as Bohs who were simply more methodical and technical than their opponents, in spite of a very creditable display by the Biscuitmakers.

With their failure to land any trophies last season the Gypsies attracted criticism from Viator, football correspondent for Sport, who observed that in spite of ‘having more players than any two clubs in Leinster’, the Dalymount club ‘cannot be said to have a team’. 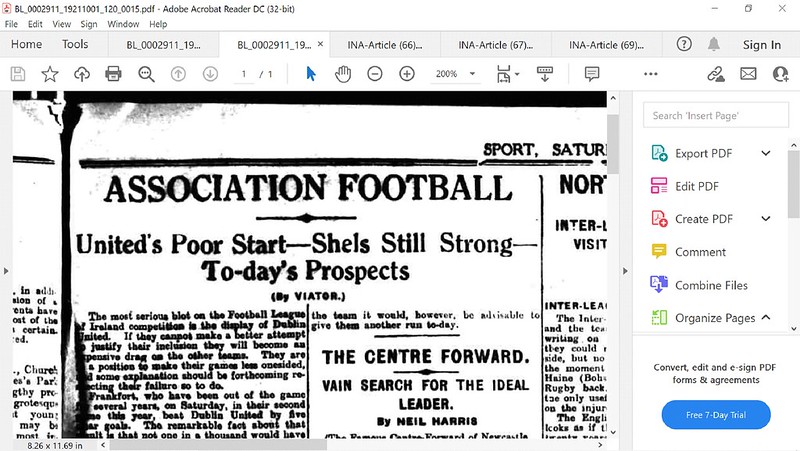 Since Bohs B were 5-1 victors over Pioneers at Dalymount in the opening round of the Leinster Senior League, the Gypsies are well on their way to proving Viator wrong in the new season.

Elsewhere the Leinster Senior action saw St James’ Gate II draw with Midland Athletic at Dolphin’s Barn, and a similarly even, if somewhat more sprightly, contest between Bray Unknowns and Shelbourne United finished 2-2 down by the seaside.

Highly fancied Shamrock Rovers won 6-1 over Richmond Asylum at Grangegorman. Many of the goals scored by Rovers, this week and last, have been down to the work of ex-Shels and Bradford City man Johnnie Murphy, whose magnificent judgement and precise placing of the ball are a joy to behold.

Although that should not take anything away from the performance of John Joe Flood, who netted five on Saturday. Flood is continuing on from where he left off last season when he scored two goals for Shelbourne in their 3-1 win over Bohs in the Leinster Senior League ‘test match’ (play-off) in May.

The two old rivals. Bohs and Shels, will clash in the League of Ireland for the first time next week.

The split between the FAI and the IFA has been driven by the LFA it is about a lot more than geography though. The Falls League in Belfast has affiliated to the new association and there have been enquiries from clubs such as Derry City and Newry Town.

There have also been suggestions that between 30 and 40 clubs from the north west are willing to swear allegiance to the new association.

The Falls League has been strengthened by the absence of Belfast Celtic from the Irish League and features teams from outside West Belfast such as Ardoyne and Lurgan Celtic in addition to local teams like Alton Utd and St Peter’s.