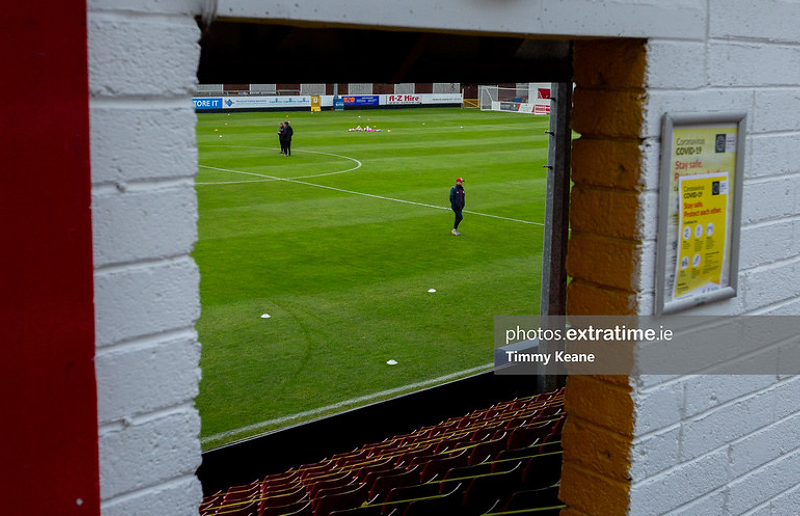 Shamrock Rovers placed one hand on the Premier Division title, as they overcame St Patrick’s Athletic 1-0 on Friday evening.

A Nahum Melvin-Lambert own goal in the dying minutes handed the champions all three points in a tense and feisty Dublin Derby. Danny Mandroiu missed a huge chance to put the visitors ahead in the first half, before Darragh Burns had a penalty appeal waved away.

The Saints began the second half much brighter, and Chris Forrester possibly could have had a brace on another day, missing two big chances to put the Saints ahead. It was Melvin-Lambert’s own goal that decided the contest, as Rovers take a nine-point lead at the top of the league.

Richmond Park hosted 2,500 home supporters for this top of the table clash, its largest crowd since February 2020.

The Saints came into the game in second place, six points behind Rovers with one more game played. Although recent losses to Finn Harps and Sligo Rovers have stuttered their title challenge, St Pat’s recent home record has been excellent, with eight wins in their last eight at Richmond Park. That said the hosts have not beaten the league leaders so far this season, with a 1-1 opening night draw followed by two Rovers victories.

John Mountney remained out with a knee issue while the Dublin Derby came too early for Lee Desmond and Robbie Benson to return.

Although the recent exits from the Europa Conference League and FAI Cup were disappointing for Stephen Bradley’s side, their full focus will be on retaining the Premier Division, with nine games remaining.

Ronan Finn returned to the starting eleven as captain, while Aaron Greene was named on the bench. Sean Hoare and Sean Kavanagh remain out injured.

Both sides enjoyed early periods of possession in the opening quarter of an hour. 17-year-old James Abankwah did very well to clear two through balls and was roared on by the packed Shed End.

The Saints had a penalty appeal turned down by the referee on twenty minutes, Burns was challenged in the box and went down but any appeals were waved away by Rob Hennessy.

Rovers’ first chance of the evening came midway through the first half. Jaros saved well but the ball found Mandroiu, who sent his effort high over the bar, amid jeers from the Saints faithful.

The visitors finished the half the stronger, with the Saints losing possession multiple times and giving needless fouls away. On the stroke of half-time Matty Smith took down Dylan Watts and gave a free kick away in a dangerous position. Stephen O’Donnell picked up a booking for his protests. Vitezslav Jaros cleared well, and Rob Hennessy blew for half-time.

The Saints began the second half superbly. Sam Bone’s terrific cross found Forrester whose header was just wide. Minutes later, Burns sent a superb ball into Forrester who miskicked his effort before Lopes cleared to safety.

After a bright ten-minute spell from the hosts, the League champions began to gain a foot on the game with Mandroiu and Towell threatening.

St Pat’s best chance of the second half came through Bone’s effort on 70 minutes. King broke down the left wing to cross before the ball fell to Bone, who’s driving effort was brilliantly saved by Mannus.

Burns sent another fantastic cross into the Rovers box, but Coughlan failed to convert. Immediately afterwards, Greene was played through on goal and his effort was saved from point blank range from Jaros to keep St Pat’s in the contest.

Jaros made an incredible double save late on after efforts by Towell and Watts to keep the Saints title hopes alive.

Despite Jaros’ heroics, it was to be heartbreak for the home side, as Melvin Lambert’s 92nd minute own goal handed Rovers all three points.

The league champions now go nine points clear at the top of the league with a game at hand.