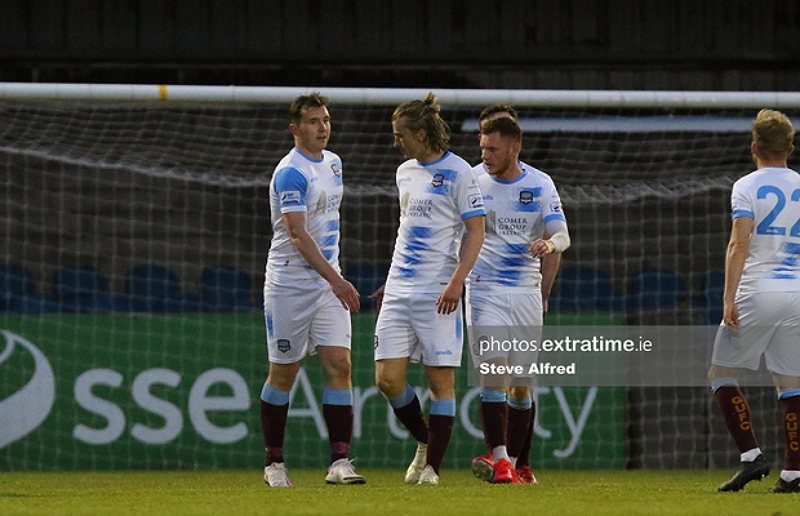 Galway United moved into second place in the First Division and secured their spot in the playoffs with an impressive 4-1 win over UCD at Eamonn Deacy Park on Friday night.

Wilson Waweru opened the scoring in the first half for the home side, with Mikie Rowe and substitutes Shane Doherty and Padraic Cunningham all netting in the second half for John Caulfield’s men.

Dara Keane managed to net a consolation goal for the visitors as they suffered their first loss in seven games.

Maurice Nugent returned to the starting line-up in place of the suspended Conor McCormack while the Tribesmen opted for one more change from their scoreless draw with Treaty United with Alex Murphy starting against the Students in place of Stephen Walsh.

Andy Myler made two changes to the UCD side that narrowly lost to Waterford in the FAI Cup last weekend with Adam Verdon and former Tribesman Donal Higgins starting in place of Dara Keane and Mark Dignam.

The Tribesmen went close in the fourth minute when Waweru headed a cross down and into Mikie Rowe’s path inside the box. The midfielder would have put the ball in the net only for Sam Todd’s intervention with the UCD defender making a great stop with his body.

UCD had a great chance to take the lead thanks to some tenacious play from Liam Kerrigan with the midfielder sneaking by Maurice Nugent on the edge of the box. It took a last-ditch sliding tackle inside the box from Conor O’Keeffe to deny the visitors in the 18th minute.

The Students went close again in the 27th minute when Colm Whelan took control of a miskicked ball from Killian Brouder. The forward pulled the ball back to Higgins but the midfielder missed the opportunity to score against his former club with the ball bobbling just wide of the goal.

Galway United got their noses in front in the 39th minute when a searching ball from Killian Brouder from the edge of the home side’s box looked set to be claimed by Lorcan Healy only for David Hurley to force the ‘keeper into an error as he dropped the ball into the path of Waweru who stroked the ball into the net for the lead.

UCD went close to equalising just a few minutes before the break however, with Luke Dennison stopping the ball on the line after a Paul Doyle free kick was headed goalward in the 43rd minute.

Galway had a couple of chances in the opening minutes of the second half with Ruairí Keating being denied by a great save from Lorcan Healy in the 50th minute. Hurley went close with a long-range effort moments later, the ball seemingly curling into the net but just going over the crossbar to UCD’s relief.

Doyle nearly had the Students on level terms on the hour mark with a long-range free kick struck at a blistering pace, Dennison had to be quick across his goal to tip the ball over the bar.

The Tribesmen doubled their lead in the 67th minute after some good build up play with Keating eventually nodding the ball back from the edge of the box allowing Mikie Rowe unleash a beautiful clean strike into the bottom left corner of the goal from distance.

Second half substitute Shane Doherty got on the scoresheet in the 74th minute with a similar goal to their second, this time it was Waweru who nodded the ball down with his teammate stroking the ball into the bottom corner for their third goal of the night.

A consolation goal was secured in the 79th minute in strange fashion with Dennison looking like he was going to take the ball into his hands, Dara Keane arrived just a fraction of a second quicker and took man and ball to nod the ball into the net.

Just five minutes later the Tribesmen had the Galway fans off their seats for a fourth time however, a quick breakaway by the home side saw second half substitute Shane Doherty take the ball into the box before squaring it to fellow sub Padraic Cunningham who had the simple task of tapping the ball into the goal.