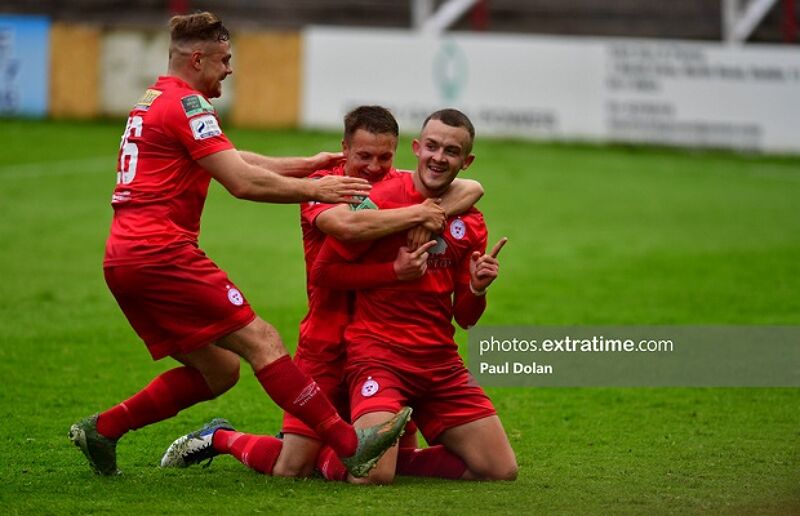 Shelbourne are just three points away from securing the First Division title after securing a dominant 2-0 win away to Cabinteely at Stradbrook on Friday evening.

The Reds were in total command throughout the 90 minutes, with goals from Georgie Poynton and Michael O’Connor sealing a comfortable win away from home.

Shels can now win the league next weekend with a win at home to Treaty United, of if they better Galway United’s result next week, at least.

Knowing that a win would all but win them the title, Shelbourne came into this Dublin derby with form, and confidence on their side.

Their return to the top-flight has been a formality for several weeks now, but they showed little sign of flagging behind in their efforts to wrap things up sooner rather than later.

Ian Morris’ charges were, however, unchanged from their most recent win away to Cork City.

Cabo, on the other hand, made five alterations from their most recent defeat against local rivals UCD.

Kieran Marty Waters continued to miss out with a long-term injury sustained in their last home game against Galway United as Harry Halwax replaced Adam Hayden between the sticks.

Shels, however, started the game off the better of the two, and they almost took the lead inside the opening five minutes.

Yassine En-Neyah was adjudged to have been felled by Jack Hudson, but Ryan Brennan was unable to beat Harry Halwax who saved well from twelve yards out.

The visitors, although, were not to be denied early on, taking the lead in the 10th minute after a fine finish from Georgie Poynton.

Poynton found the far corner of the net after he was played in by a deft Shane Farrell pass, with the ex-Waterford man netting his fourth goal of the season.

Morris’ side were in ominous form through most of the action in a relatively quiet first-half in terms of action, but Cabo were a threat at times.

Ben Feeney went close with a header from a Niall Barnes cross in their best chance of the half.

Shels, however, did not ease off despite a lack of real chances. The best they mustered up was an effort from Michael O’Connor who forced a smart save from the impressive Halwax.

The resulting corner was then almost met by the head of Ally Gilchrist at the back post as Shels took a deserved lead into the half-time break.

The second-half continued in a similar vein to that of the first, with Shels causing a plethora of issues for the hosts.

Ally Gilchrist had the best chance of a rather quiet start however, with his effort crashing off the bar after a Poynton corner-kick.

Substitute Jay Nwanze then denied fellow Shels substitute Stanley Anaebonan who looked as if he was set to put the ball into an empty net.

That was after Luke McWilliams poor back pass that was not dealt with suitably by Harry Halwax and Kevin Knight, with the latter forced off with an injury for his troubles.

Anaebonan was a real threat for the visitors during his cameo, and his efforts finally bore fruit late on as he assisted Michael O’Connor’s insurance strike late on.

The lively forward found O’Connor who turned and shot home into the back of the net.

Shels did, have an opportunity to make it three deep into injury time, but Halwax stood tall to deny Anaebonan after a ball played in from Kameron Ledwidge.

2-0 was how it finished, as Shels’ title coronation gets ever closer, while Cabinteely’s sights are left firmly set on next season.