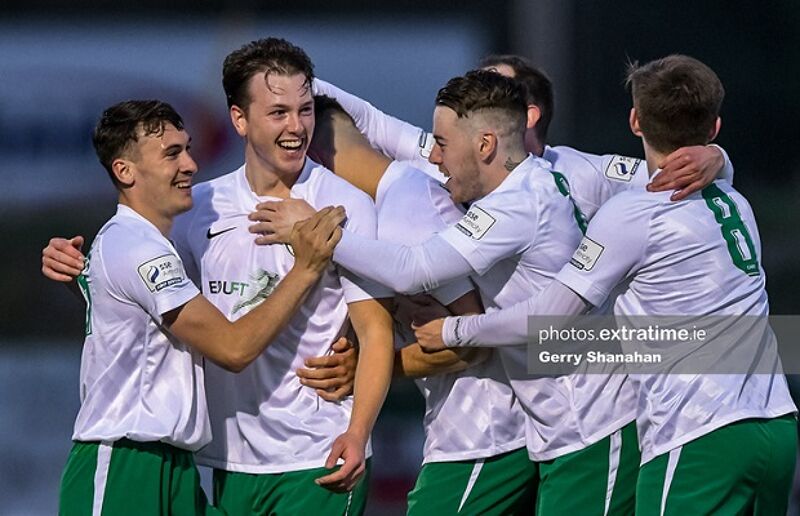 Cabinteely will be looking to put Shelbourne’s First Division title party on ice this weekend as they welcome the Reds to Stradbrook on Friday evening (kick-off is at 7.45pm).

Cabinteely have endured a difficult season on the pitch, with little luck going the way of Pat Devlin’s charges.

Despite that, Cabo have caused Shels problems in recent years, and they will be hoping to do the same this weekend.

“Shels are a top team. They have done very well this season. It looks like they are going straight back up,” Devlin said.

“We have a lot of changes going on at the club, a lot of good stuff.

“On the pitch, we’ve played very well lately, but we have been unlucky with a few results.

“We want to give it everything we got and win the game.”

With a Premier Division return in sight, Shelbourne take on Cabinteely at Stradbrook as they look to all but confirm that return to the big time.

Shels are runaway leaders in the First Division this season, and they are showing little sign of being stopped in their title pursuit.

“We’ve kept the players fresh – preparation has been good, we’ve worked hard expecting different scenarios in the game, but we need to make sure we’re at the levels we’ve been hitting in recent weeks,” Shels boss Ian Morris told shelbournefc.ie.

“We need to work. They [Cabinteely] have a big squad and can make a number of changes.

“Pat Devlin will have them fired up. There’s no doubt they’ll put up a tough test.

“This is a huge game for us. It’s there for everyone to see.”

Shelbourne will be without JJ Lunney, Gerardo Bruna, Alex Cetiner and Alex Nolan for the game through injury.

With a win, Shelbourne can all but secure their place in the Premier Division next season with just four games of the league season left after Friday night.

Prior to their last two defeats against Shels this season, Cabinteely were unbeaten in six versus Shelbourne.

Cabinteely are winless at home since May when they defeated Treaty United, while Shels have only won once in their previous four games away from home.