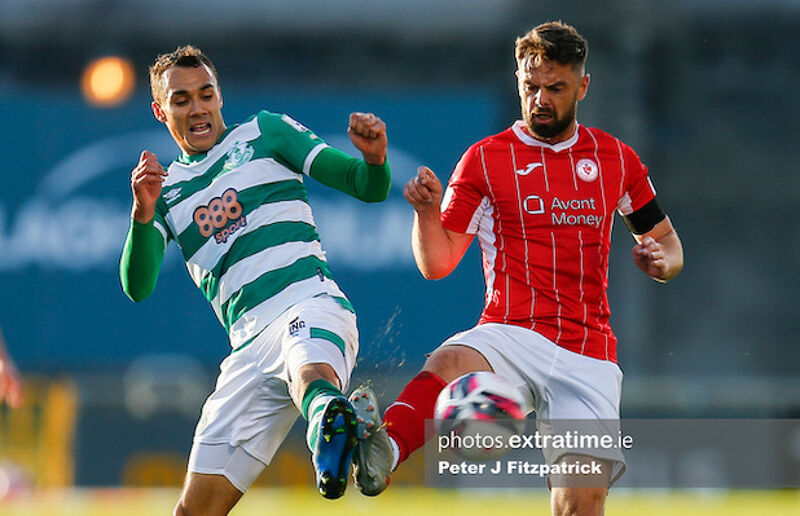 The Bit O’Red earned two wins in five days in the last week putting behind their rotten form of four defeats and a draw from their previous five matches.

Following up on the 2-0 win in a feisty encounter with St. Pat’s last weekend, Liam Buckley’s men beat Dundalk with a come from behind 2-1 win on Tuesday and that will give them plenty of confidence when they face a Shamrock Rovers team they remain unbeaten against this season.

“We were delighted to get three points on Tuesday,” said Coach Buckley. “We knew Dundalk would be a tough game because they still have a strong starting XI and coming away with the result was great.

“The attitude we’ve shown and the buy-in from the players coming off the run we’ve been on has been particularly pleasing. They understand what it takes.

“This game is no bigger than any other, it’s another three points on offer in the same way as any other game, and we don’t get jump up and down if we win games or write things off if we don’t.”

“As long as you have four days between games, it’s enough to be able to recover properly. We spoke to the players about the mental and physical challenges as we move from game-to-game, it isn’t a problem to play Tuesday-Saturday. We’ve had time to get right again.

With FAI Cup action happening elsewhere this weekend, this evening’s game gives Sligo Rovers not only the chance to cut the eight point gap to the league leaders but they can move just two points behind second placed St. Patrick’s Athletic if they can make it back-to-back wins against the Hoops.

“Shamrock Rovers have been the benchmark for the last 18 months. They’ve a good style and we’re aware of how difficult it will be. We’ve done well against them this season and again they’ve been close games.

“The fans know we’re in this battle to achieve our target at the end of the season and we’re going to give everything to try to get it over the line.

“This is another game in that challenge in front of our supporters which we all appreciate after going so long without them.”

It is a big seven days for Shamrock Rovers as they seek to retain the title with two away games against the teams directly below them in the table coming up.

Should they secure a win in Sligo on Saturday and claim a victory when they travel to play second placed St. Pat’s next Friday, it would leave them six points clear with nine matches remaining and with a game in hand over the Saints.

They will be fully concentrating on their game with the Bit O’Red this evening though as they face a Sligo Rovers team they have failed to beat this season and who have come into form winning back-to-back games including a fiercely contested match against St. Pat’s last weekend.

“I don't think their last results would have mattered either way coming into the game on Saturday,” said Hoops Head Coach Stephen Bradley. “They'll have a big crowd and a high energy. It'll be a difficult game regardless of their recent results but we're really looking forward to it."

There will also be a sizeable away support for the Hoops, many of whom will be travelling to their first away game out of Dublin since the last game before the pandemic – when Rovers won 3-2 in Sligo in early March last year.

The Hoops beat the Bit O’Red 4-0 in Tallaght later that season but this year the team’s drew 1-1 before Liam Buckley’s boys beat the Hoops 1-0 in Dublin 24 the last time they faced each other.

"If you look at the game in Tallaght it was a really poor-quality game from both teams. They obviously scored the decisive goal to take the three points and the game at the Showgrounds could have gone either way, there was chances for both teams. They were both tight games and I think Saturday will be a tight game as well."

Having lost four on the bounce in all competitions for the first time since 2012, the Hoops got back to winning ways last week with a Danny Mandroiu brace earning them a 2-0 win over Waterford in Tallaght.

"It was really good to get the three points, but I thought the performance was very good. We scored two, it should have been more, and we didn't concede which is good.

“I think Friday was probably the first night that we saw Danny recover from his injury. He's obviously got a knock in Europe, and it hampered him in the last few weeks in terms of being able to run, open up and really play his game. He looked a lot freer in his movements."

The 3-2 loss to Shamrock Rovers last season is Sligo Rovers’ only defeat to the Hoops in in their last eight games at the Showgrounds.

When the teams last met, Romeo Parkes’ goal secured all three points for the Bit O’Red in Tallaght Stadium.