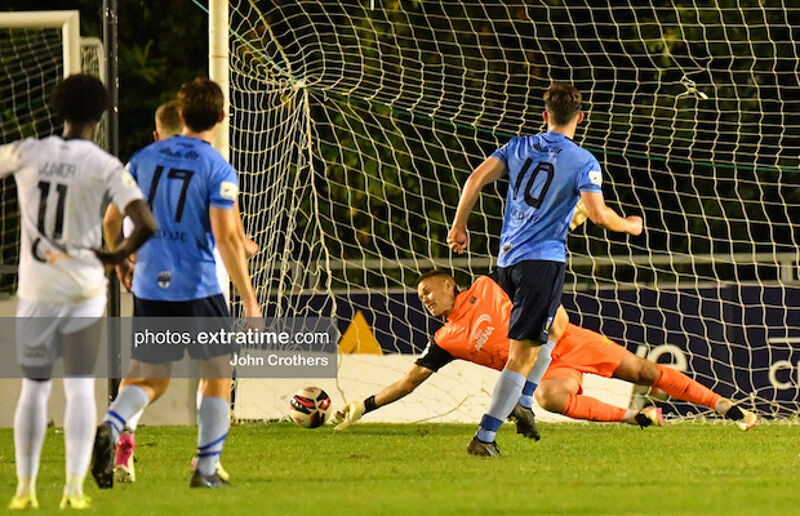 Waterford progressed to the semi-finals of the FAI Cup after an enthralling 3-2 win over UCD at the UCD Bowl on Friday evening.

A raucous contingent of travelling fans cheered the Blues to victory in a game where UCD had more than enough chances to take the victory themselves.

The Students came storming out of the blocks in the early stages, playing some excellent passes and dominating possession.

Liam Kerrigan put in an inspired performance early on and linked up with Colm Whelan to create UCD’s first chance of the game after ten minutes.

Having flashed a shot over the bar, Whelan didn’t have long to wait to break the deadlock.

He took a high ball out of the air, effortlessly turned the experienced Greg Halford and fired a shot past Brian Murphy to give the Students a well deserved lead after 12 minutes.

Waterford slowly began to grow into proceedings and threatened the UCD goal with John Martin and Prince Matswunguma finding themselves in dangerous positions, but the Blues could still not trouble Lorcan Healy’s goal.

Waterford continued to turn the screw until they got their reward as Quitirna Junior Armando levelled the game ten minutes before half-time.

UCD, who had looked so composed in possession, gave the ball away close to their own box and Junior Armando was able to pounce and roll the ball past Healy.

The Blues pushed for a second before the break with Isaac Tshipamba coming agonisingly close to turning the ball home but couldn’t stretch far enough to finish.

It was a heated affair at times with a whopping six yellow cards being shown in the first half alone, three to either side.

The sides went in level at the break after a breathless first half with UCD dominating the first quarter of the game and Waterford the second.

The Blues looked to continue their momentum right from the restart as Phoenix Patterson struck a shot just over the bar in the opening stages of the half.

UCD flipped the game on its head however, as they retook the lead entirely against the run of play.

Colm Whelan won possession near the half-way line, used his electric pace to run at the Waterford defence and laid the ball off to Liam Kerrigan who rolled it past Murphy to restore UCD’s advantage.

The goal seemed knock the wind out of the Blues who lost their grip on the game for a few minutes, but they restored parity for the second time through a spot kick from Patterson.

Sam Todd committed the foul just inside his own penalty area and the former Tottenham Hotspur youth player made no mistake in making it 2-2 after 66 minutes.

The Students almost regained their lead straight away as Paul Doyle won possession high up the pitch, squaring the ball to Whelan who was denied by a fantastic save from Murphy who threw himself at the feet of the UCD attacker.

Kerrigan continued to torment the Waterford defence down the right wing and won his side a penalty after 72 minutes.

However, Whelan, normally so reliable from the spot, was denied by a fine save from Murphy who got a strong hand on the shot and palmed the ball away from goal.

Murphy denied Whelan for a third time in ten minutes as he got down quickly to stop the former Waterford striker from taking the ball around him and saved his team’s lead yet again.

Despite UCD knocking on the door for much of the second half, it was Waterford who claimed a late winner to ensure they progressed.

The Students almost found their way through on goal with a counter-attack but the Blues won the ball back and launched an offensive of their own with Mutswunguma knocking a wide cross past Healy.

UCD could not fashion another chance and Waterford were able to see out the win after a classic cup tie.

The Students put in a brave performance against higher league opposition but will rue the chances they missed in the second half.

Waterford will move on to the semi-final for the first time since 2009.