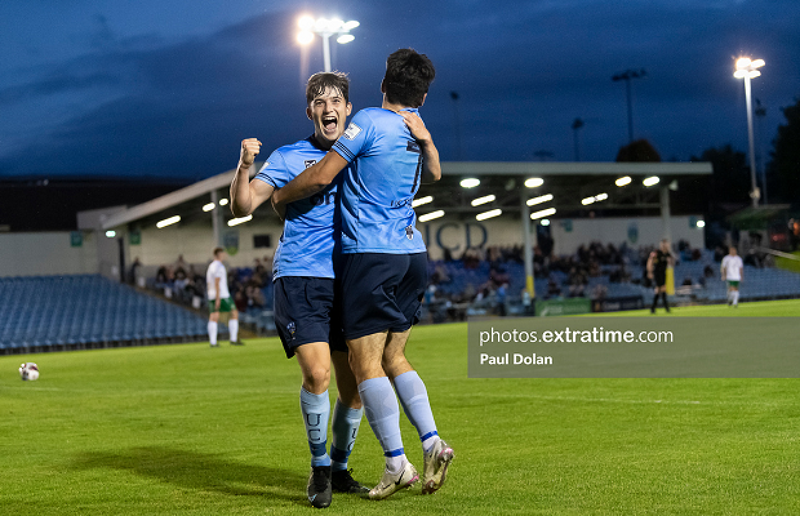 Colm Whelan and Liam Kerrigan will be expected to lead the line for UCD this evening Credit: Paul Dolan (ETPhotos)

First Division promotion contenders UCD welcome Waterford to the UCD Bowl in the quarter-final stage of the FAI Cup on Friday evening (kick-off is at 7.45pm).

The FAI Cup has revitalised the Students’ season, with their first-round victory against Shelbourne following un a run of seven games unbeaten in all competitions.

That was after they endured four defeats in six previously.

UCD have risen from fifth to second in the First Division in recent weeks, rediscovering their goalscoring form.

They also claimed a win over Longford Town in the second round to secure their place in the cup quarter final.

Top scorer Colm Whelan and Liam Kerrigan have been in fine form with the First Division’s most ruthless attack scoring 16 goals in their last five matches across league and cup including last week’s 5-2 defeat of Cabinteely.

Despite the efficiency of their attack, the Students have only the sixth best defence in the league and may come under pressure against a Premier Division attack.

UCD come into the match- up in flying form and confidence within Myler’s squad will be high that they can pull off an upset and repeat their achievement of 2018 where they defeated than Waterford to reach the semi-final.

Like UCD, the Blues have also enjoyed a turn around in form since the start of their cup run, securing vital league wins against Drogheda United, Bohemians and Longford Town.

That has come since they came out on the right side of the eight-goal thriller against Athlone Town in the first round.

Waterford now sit one point clear of safety in eighth place with manager Marc Bircham hoping that his side’s cup adventure continues but recognising the threat that UCD pose.

“We look to Friday night [v UCD] as another big game.

“We want a good performance, and we’ll look to advance. It’s a chance to get into a Cup semi-final which doesn’t come around too often and the players are looking forward to the game.

“We know UCD will be well up for the game so we can’t take anything for granted. They’re doing well in the First Division and had a big win last weekend, so we know there won’t be anything easy in this game.”

The Blues come into the fixture on the back of a 2-0 defeat to Shamrock Rovers and an important draw against relegation rivals Dundalk and their cup run saw them overcome Kilnamanagh in the second round.

Despite a number of injuries within the squad, Waterford will remain confident of reaching the FAI Cup semi-finals for the first time since 2009.

The sides last faced each other in October 2019 where Waterford secured a 4-2 win.

UCD have won nine of the last 18 meetings of the teams with Waterford having seven victories along with two draws.

The Students have one FAI Cup victory to their name, winning in 1984 while Waterford have lifted the trophy twice, in 1937 and 1980.