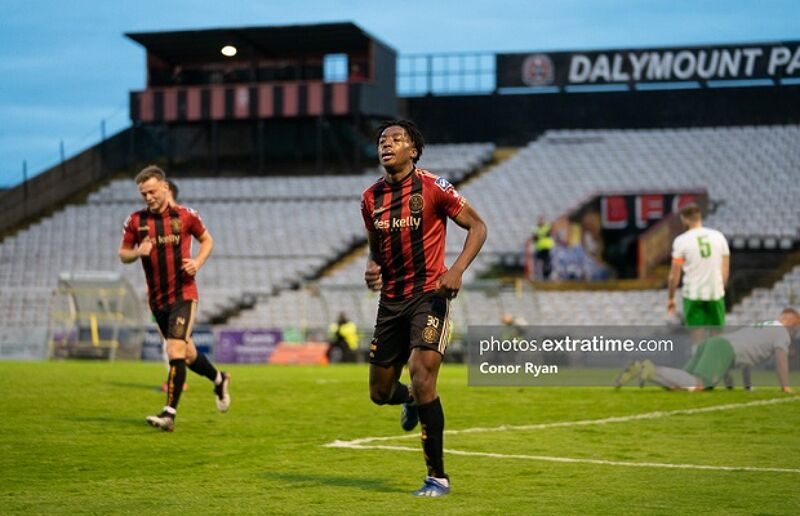 The Dublin outfit moved up to 5th in the table, one point behind Derry City, who sit in 4th and also have two games more played.

Finn Harps remain in 7th place in the table, four points clear of Waterford and five clear of Dundalk, who currently occupy 9th, although they do have two games in hand.

Promise Omochere gave the visitors the lead shortly after the half hour with Georgie Kelly getting the second from the spot five minutes before the break.

Ryan Rainey pulled a goal back for Harps in the 80th minute to set up a grandstand which included ‘keeper Gerard Doherty coming up for a very late corner.

Ollie Horgan made five changes to the side that got a fiery draw at the Brandywell on Friday night with David Webster, Karl O’Sullivan, Johnny Dunleavy and Sean Boyd in the starting XI while Gerard Doherty replaced the suspended Mark McGinley.

Keith Long also wasn’t afraid to change things up after their defeat to Drogheda United with Anto Breslin, Rob Cornwall, James Finnerty and Dawson Devoy getting a starting berth.

The opening quarter hour of this encounter at Finn Park saw very little in the way of decent opportunities, Bohs had a couple, but both failed to alarm the Harps defence.

Will Seymore stung the hands of James Talbot in the twentieth minute while at the other end Promise Omochere called Gerard Doherty into action with a low effort as the chances began to flow.

The hosts went within a whisker of breaking the deadlock close to the half hour and after an initial block, Karl O’Sullivan had a low shot stopped on the line.

The visitors came just as close not long after with Liam Burt seeing a low drive crash off the base of the post, it rebounded to Omochere, who saw his effort palmed over the bar.

Two minutes after the half hour, Keith Long’s side took the lead much to the annoyance of the home players and support who felt that Will Seymore was in need of attention.

After an initial corner was cleared, Seymore remained down while Bohs continued to play on. The ball was recycled into the area and Georgie Kelly had an effort cleared off the line by Ryan Rainey, it was lobbed back in once more by Keith Buckley and Omochere got a deft header to take it beyond Doherty.

Five minutes before the half time interval and after continued pressure, Bohs were awarded a spot kick after Kosovar Sadiki tripped Ross Tierney in the area. Georgie Kelly stepped up and emphatically converted the penalty for his 14th goal of the campaign.

David Webster had a late chance to reduce the deficit before the break but Talbot was equal to it after Barry McNamee’s set piece delivery.

Sean Boyd went close for the hosts as the game approached the hour mark, heading narrowly wide following a set-piece from the right side.

Bohs did have chances to extend their lead and put the game to bed but Gerard Doherty kept the advances at bay while Omochere also saw an effort brush the side netting.

Finn Harps weren’t going down without a fight and they set up a tense final ten minutes as Ryan Rainey got a goal back. A long throw-in from the left found its way to David Webster on the right side of the area and he whipped a ball back in for Rainey to head home at the far post.

Harps pressed for a late equaliser but it never materialised, even with Doherty present for a last ditch attempt during a corner which was cleared off the line from a Sadiki header.

Bohs countered and could have sealed the three points with Liam Burt bearing down on an open goal but he was halted in his tracks by Karl O’Sullivan on the halfway line.

It’s the bitter taste of defeat for Finn Harps for the first time since the 17th of July while Bohemians have now won three of their last four games.