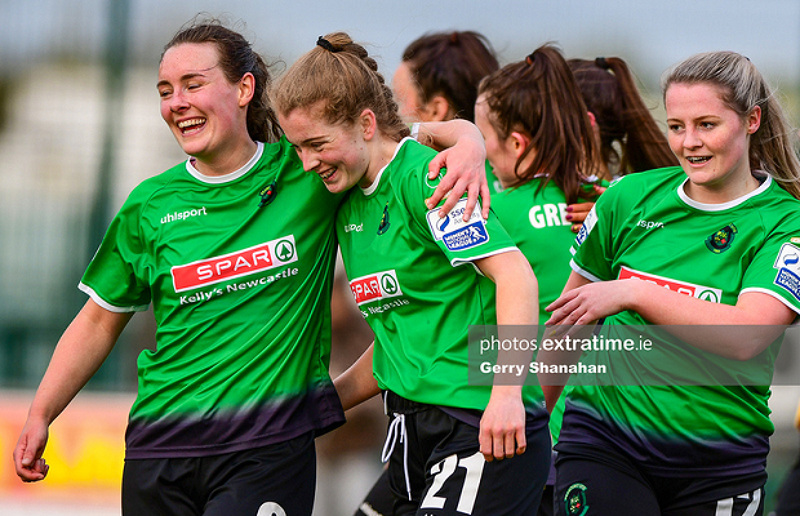 This is the final time the top two sides in the League will face each other with just two points separating the teams coming into the final games of the season.

United secured a win over the Reds in April when they ran out 2-1 winners at home.

James O’Callaghan’s side have only lost one game this season with Shelbourne coming out on top with a narrow 4-3 win at Tolka Park in July.

Since then, Peas are on a seven-game unbeaten run, and they could move to the top of the table with a win later today.

Peamount United also have a game at hand over Shelbourne and a win could really put the pressure on the Reds with just a few games left in the season.

There will be one guaranteed change to the team since the last time they faced Shelbourne with current WNL top scorer Eleanor Ryan Doyle now at Birmingham City, which will be one less thing for Noel King’s side to worry about on Saturday.

In their last WNL game they ran out 1-1 winners over Wexford Youths in another key result in United’s race to the title.

They have also secured their place in the Women’s FAI Cup semi-finals with a win over Treaty United in Limerick last weekend, they will now face Wexford Youths again for a spot in the final of the competition.

Shels are currently top of the table and a win on Saturday would be a huge result as the Reds search for their first WNL title since 2016.

They won their last two games against Cork City and Athlone Town, but they suffered a second defeat of the season when Wexford Youths secured a late win over Noel King’s side at Ferrycarrig Park in August.

Shelbourne have exchanged losses with Peamount United in the two games contested between the side so far this season and this third meeting could be the defining moment in the WNL title race.

The last time the sides met Shelbourne narrowly secured a 4-3 win to end a five game winning streak that Peamount had over them.

Their last time out in the WNL saw Emily Whelan, Ciara Grant and Noelle Murray help Shels to a 3-1 win over Cork City and keep them top of the WNL table.

Jamie Finn and Emily Whelan have now departed Noel King’s side with both moving to Birmingham City in recent weeks so time will tell jus how much those transfers affect Shelbourne coming into the end of the season.

They also recorded a 1-0 win over Cork City in their Women’s FAI Cup quarter-final, setting up a semi-final with Galway. They might yet face Peamount United once again this year in the final at Tallaght Stadium should both side progress.

Peamount are on a seven-game unbeaten run with their last loss coming against Shelbourne in July.

Shelbourne have won their last two games after suffering defeat to Wexford Youths last month, their only other defeat came against Peamount earlier in the season.

Both side have lost key players to Birmingham City in recent weeks with the Reds’ Jamie Finn and Emily Whelan leaving last month. Peamount have lost current WNL top scorer Eleanor Ryan Doyle to the Women’s Super League side.