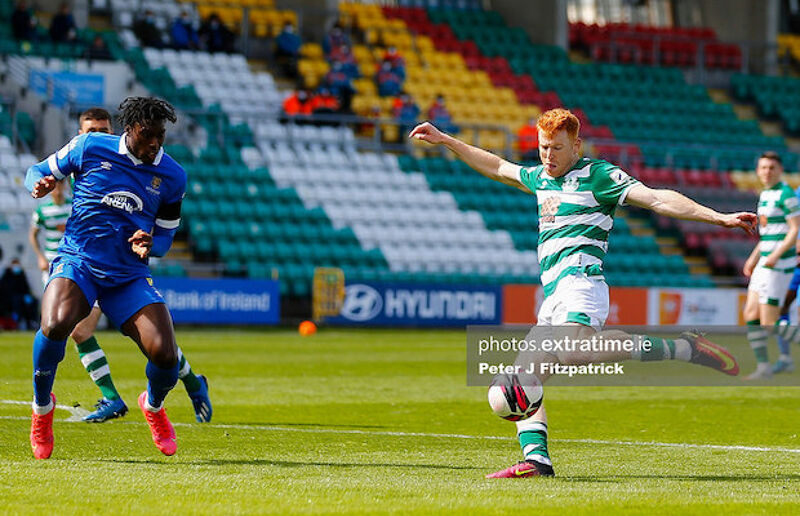 Rory Gaffney was on the scoresheet when the sides last met in Tallaght Credit: Peter Fitzpatrick (ETPhotos)

Having lost 2-1 in Finn Park last week, the Hoops come into Friday’s game against Waterford (kick off 8pm) with four consecutive defeats in all competitions – their worst run since 2012.

Last week’s loss though was their first since the end of June, having won five in a row prior to the defeat to Finn Harps. They remain top of the table on goal difference and have two games in hand over second placed St. Patrick’s Athletic.

"We're obviously in a strong position,” said Hoops Head Coach Stephen Bradley speaking to shamrockrovers.ie ahead of the game. “We're top of the league. We've lost a league game and I think we need to relax and trust what we do.

“This team has lost six domestic games in two-and-a-half years. I think we need to understand that that happens. It's football. We've had a little test and I've no doubt we'll come through it. We'll be fine."

Bradley brought a depleted squad to Ballybofey last week and could only name six substitutes – four of them teenagers who between them had started just one league game for the Hoops.

However he has more options this week with skipper Ronan Finn and Danny Mandroiu returning from suspension and Pico Lopes back from international duty with Cape Verde.

“Barry did well, considering he's only been in the group a day before that. He's still finding his way, learning what we do and understanding what we do but it was a good start from Barry, and it's a great platform for him to go and build on."

Rovers have beaten the Blues 3-1 (in Tallaght) and 4-1 (at the RSC) already this season but face a stiff test against an inform Waterford side under new boss Marc Bircham.

"They're very good. I've watched their last few games and they've been excellent. They're a completely different team to the one we faced earlier in the season.

“We won the most recent game quite well but it's going to be a difficult game. There were good signs at Finn Harps at times, so it's a game we're looking forward to."

The Blues have certainly got a new manager bounce under incoming boss Marc Bircham. Waterford have won six and drawn two of their last nine competitive games.

They will fancy their chances of at least getting a point against a Rovers team who have struggled results wise in the last few weeks.

Last time out a 77th goal from Anthony Wordsworth earned Waterford a point at the RSC against second from bottom Dundalk, a goal which cancelled out Sean Murray’s early strike. That draw kept the Blues a point clear of the Lilywhites.

“We started too slow again last week and were behind so quick so that’s something we’re looking at sorting,” said Bircham speaking to his club’s media team. “We have a game plan and we’re having to change when we concede early. But I was pleased with our reaction.

“We got a point but we could have got three with all the pressure we put on Dundalk in the final quarter and if a couple of decisions had gone our way.

“This Friday will prove another very tough challenge for us. They’re a top class side and we know we can’t afford to not be on our game. We’ve prepared well, had a good week in training and we have our game plan going up there. We want to win. We’re not going to just take part.

“We’ve got a few players back from suspension and injury over the past two weeks so we’ll be giving it a good go with only 10 games remaining.”

MATCH STATS
Waterford have lost ten in a row against the Hoops. Their last victory over Rovers came early in 2018 when they won 2-1.

The last time Rovers lost four competitive games in a row prior to last week was at the end of the Stephen Kenny managerial era in Tallaght. Rovers lost 1-0 to Bohs on 10 September 2012 which precipitated Kenny’s departure from the manager’s job. His assistant Stephen Glass took temporary charge for the following game – a 2-1 FAI Cup away defeat to Shelbourne. Brian Laws was then appointed director of football and he presided over the 3—1 defeat to Drogheda United in the League Cup final and the 2-1 loss to St. Patrick’s Athletic.

Rory Gaffney is top scorer for Rovers with 11 goals in all competitions – eight of them in the league.