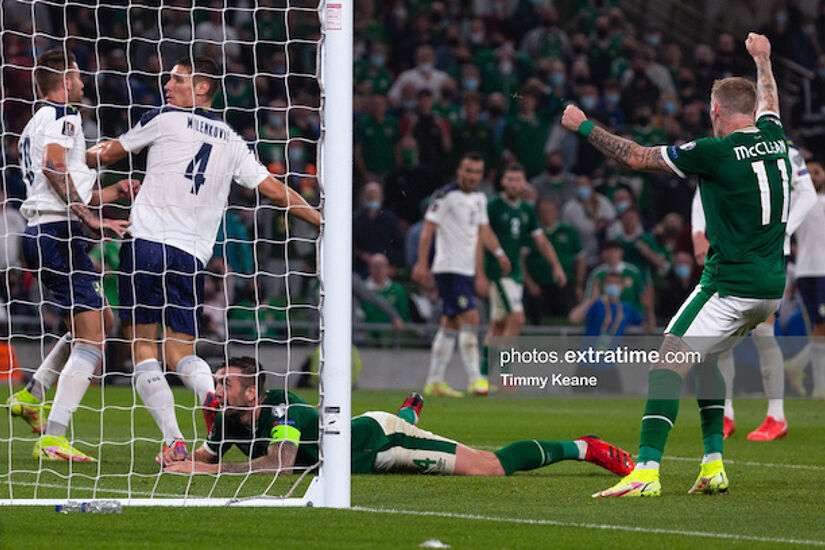 Shane Duffy of Republic of Ireland in action against Nikola Milenkovi? of Serbia prior to scoring an own goal, Ireland’s equaliser, during the FIFA World Cup 2022 qualifying group A match between Republic of Ireland and Serbia at the Aviva Stadium in Dubl Credit: Timmy Keane (ETPhotos)

A late Serbian own-goal saw Ireland once again clinch a late point in their World Cup Qualifying campaign at the Aviva Stadium.

Nikola Milenkovic’s late OG undone the visitors who were also thwarted by the heroics of Ireland keeper Gavin Bazunu throughout the contest.

That was after Sergej Milenkovic-Savic gave Serbia a first-half lead.

The result does little in terms of Ireland’s World Cup dreams, but it was a result that may prove telling in terms of the Stephen Kenny era.

No competitive win in 15, and winless against Luxembourg and Azerbaijan in a disastrous qualifying campaign, has seen questions go the way of Kenny and his stewardship of the side.

But when the going gets tough, it is often the case that Ireland rise to the challenge, and this was no different.

Following a dismal draw at home to Azerbaijan, Kenny opted to make changes, a few enforced, as Andrew Omobamidele came in to make his full senior debut for the Boys in Green.

With the changes in mind, Ireland were nearly caught cold early on, but Aleksandar Mitrovic could not make the most out of a misplaced touch from Shane Duffy.

Despite their slow start, the hosts grew into the game shorty after. Adam Idah began to get some joy out of his defensive opponents, while Jeff Hendrick burst forward on occasions.

Nemanja Gudelj however grew into the game just as Ireland were pushing forward, and he forced two good, yet unremarkable saves from Gavin Bazunu.

Hendrick then went close himself after 18 minutes, but he could only see his shot on goal bounce wide of goal.

As Bazunu impressed with some authoritative play, there was little he could have done about the Serbian opener.

There was little that the ex-Shamrock Rovers keeper could have done to keep the ball out of the net once it hit the Serbian’s head.

As the half wore on, Ireland had to withstand a mini-Serbian storm. But neither Nikola Milenkovic nor Mitrovic were able to find the back of the net.

The latter, Mitrovic, was denied by a strong Bazunu hand as Ireland went in a goal down at the break.

Buoyed by a fervent home support, Kenny’s side went on the attack straight from the restart, with James McClean getting plenty of space down the flanks. He, however, could not find an Irish head to suitably trouble Predrag Rajkovic.

But that early spell could not stifle the Serbs who continued to pose a real threat to the Irish defence.

Bazunu was forced into two good saves from Mitrovic, with the latter being the most impressive of the two.

Mitrovic got on the end of a salivating Filip Kostic cross, but the ex-Hoop was on hand to tip the ball over the bar after saving with his feet moments earlier.

Milenkovic-Savic then went close himself after a lay-off with Mitrovic, but his effort on goal went over the bar after some intricate play.

McClean was then forced into a last-ditch tackle to deny Serbia clinch all three points, before Milenkovic-Savic then went close himself from a Dusan Tadic free-kick.

Bazunu then saved from Luka Jovic as Serbia broke from an Ireland corner. And befitting of the game he was having, he saved when it looked as if he was unable to do so.

But Ireland were not dead yet. The Boys in Green cranked up the pressure, and the noise, and they were duly rewarded for that in the 87th minute.

As Serbia tried to clear a Callum Robinson cross, Nikola Milenkovic had the misfortune of turning into his own net.

It may have got better for Ireland during a frenetic injury time, but Omobamidele’s long-range strike was tipped away from the top corner by Rajkovic.

Shane Duffy had the last chance, but he too could only head over the bar as the Boys in Green clinched another point from the jaws of defeat. And that will do for the time being.

extratime.com Player of the Match: Gavin Bazunu (Republic of Ireland).

The game between Republic of Ireland and Serbia has ended.