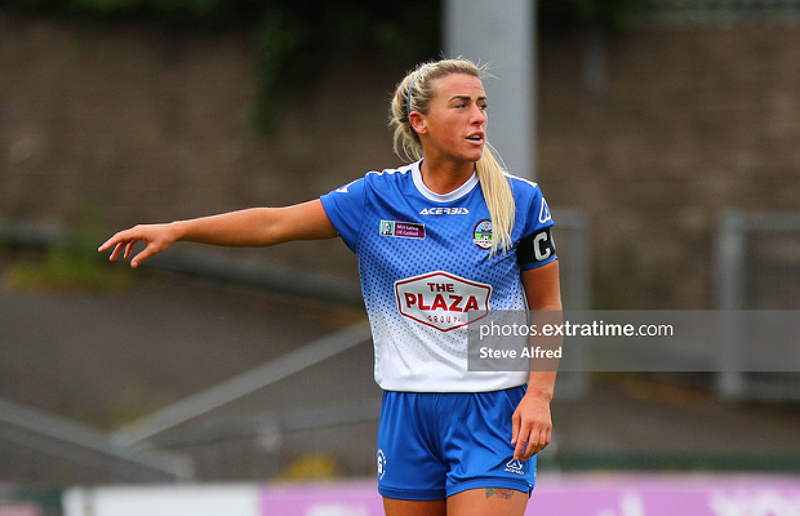 Savannah McCarthy in action for Galway during their 2-0 win over Cork City on Saturday, 5 June 2021. Credit: Steve Alfred (ETPhotos)

Galway’s Savannah McCarthy has been named the Women’s National League Player of the Month for August.

The defender claimed the award ahead of tough competition with Shelbourne’s Ciara Grant and Bohemians’ Courtney Maguire finishing second and third respectively and she follows teammate Rachel Kearns who won the award for April this season.

McCarthy has been one of the Tribeswomen’s top players this season and her performances at centre-back helped Galway to two wins and a draw out of their four games last month.

The Kerry native has excelled at centre-back and has helped Galway galvanise their defence under Stephen Lally since the manager took over midway through the season.

"Stephen [Lally] coming in has been great. He has been great with the girls, and everyone seems to love him, so I’m really enjoying being around him," McCarthy said, speaking to the Women’s National League website.

"Right now, our main aim is the Cup so hopefully we can go all the way. We're taking it game by game and trying to finish as high as we can.

“We probably can't make the top three, but we will try to push it the whole way."

McCarthy has brought her good form into September with another strong performance in Galway’s 1-0 FAI Cup win over DLR Waves on Saturday night.

The Tribeswomen face Waves again in the League this Saturday at the UCD Bowl (kick-off 4pm).