Stephen Kenny: 'Near-sightedness does not create anything' 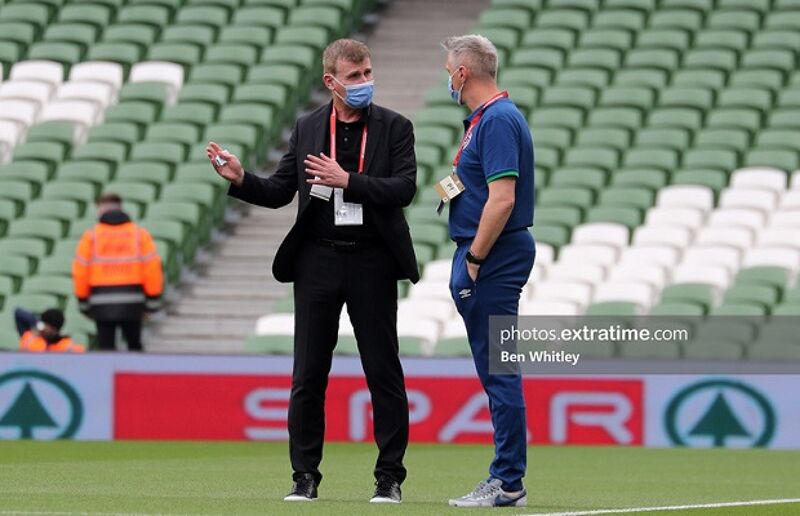 Republic of Ireland boss Stephen Kenny believes that he is on the right path to bring the Boys in Green back to previous heights as the senior side continue to struggle.

Kenny launched a passionate defence of his reign so far at a press conference on Monday morning, claiming that the current path he is bringing his side on is the right one.

He also noted that the plan is to reach Germany 2024 with this side.

“Our performances overall in this campaign - bar the Luxembourg game which we were very disappointed with - have been good,” Kenny said at his pre-match press conference.

“With Serbia and Portugal in the group, and the spine ripped out of the team, and we haven’t qualified for the World Cup since 2002, did anyone think that we were favourites to qualify or that we should qualify?

“We certainly have a plan in place. I made the decision - right or wrong - that we would build this squad to be a really, really competitive team to qualify for Germany 2024.”

And with plenty of talk surrounding his future as Ireland boss, Kenny stressed the importance of no longer taking the short-sighted approach to Irish football.

“I think there’s real progress overall to be honest. That’s the way I see it, the way my staff and all the coaches see it and there are a lot of people behind us.

“There are a lot of people who aren’t (behind them) who say ‘that’s not your job to develop the game here, your job is just to win the next game’.

“That kind of near-sightedness doesn’t create anything, you might beat teams that you should beat but you’ll never beat the teams you strive to beat.

“You’re trying to build something tangible over a period of time and that can be successful.”

The Republic of Ireland take on Serbia on Tuesday with their World Cup dreams all but over.

But even with that in mind, Kenny stressed his reasons as to why he is continuing to blood young talent into his squad despite results not going his way.

“I’ve done it because we have a very exciting squad emerging.

“We’ve not had a huge pool of players to pick from between the experienced players towards the end of their careers and the young players who are coming through.

“I’m very, very pleased with the emerging squad and some of our performances have been excellent, like against Portugal the other day.”

James McClean: 'The media almost gets a kick out of us not doing well' https://t.co/YXzzjTu51c pic.twitter.com/yjMaPu0hzA