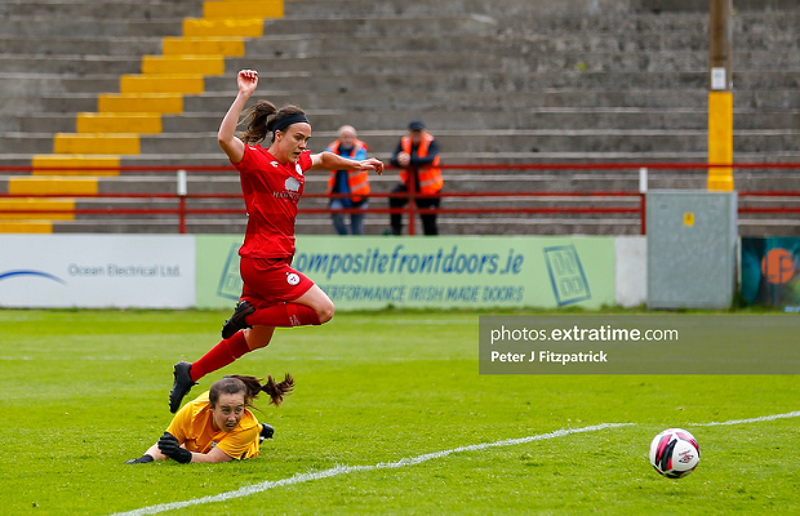 Title chasing Shelbourne saw off Cork City with a 3-1 win at Turner’s Cross on Saturday afternoon in the Women’s National League.

This was a perfect performance from Noel King’s side, as they controlled possession from the first whistle.

Within minutes of kick-off, Rachel Gargan and Emily Whelan had half chances which went wide,

City responded to this by narrowing the space in front of goal and Danielle Burke and Ciara McNamara did well with this change to close down space and frustrate Shelbourne.

The opening goal came after 20 minutes when a through ball from Gargan parted the City back four, it found Emily Whelan, who slotted in to make it 1-0 Shelbourne.

The striker nearly doubled her lead seconds later when she burst into the box and fired a shot off with venom, but Abby McCarthy dived low to save.

The Red’s search for a quick second goal was ended just four minutes later by Noelle Murray, who finished with ease.

City’s attempt at a response was led by Laura Shine but the forward could not get through a tight Shelbourne midfield.

The Reds added their third of the afternoon just before half-time when Chloe Mustaki dinked the ball over the top of the defence for Ciara Grant to volley it in.

City pulled a goal back seconds after the restart when Nathalie O’Brien crossed the ball into the box and it floated in.

The heroics of the Rebel’s goalkeeper decided the remainder of the game in the end, as Shels left Turner’s Cross without adding to their three goals but with a valuable three points in the race for this year’s WNL title.