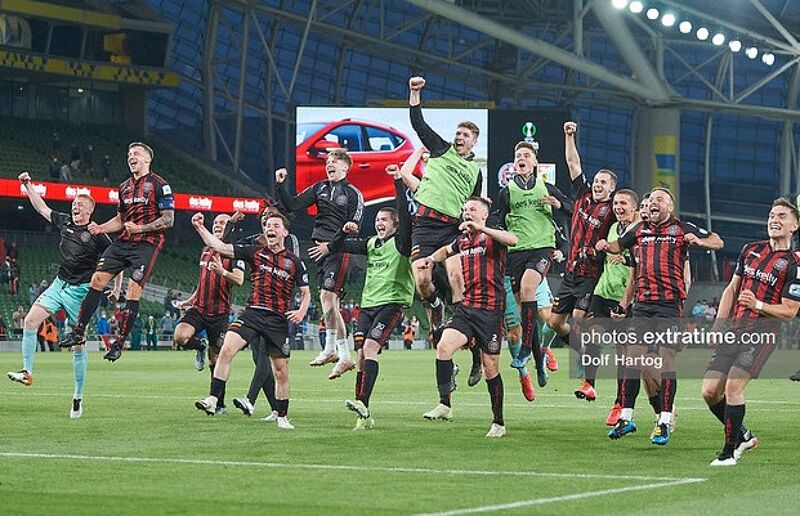 Bohemians will be hoping to continue their winning streak at Lansdowne Road when they host PAOK of Greece in the Europa Conference League third qualifying round first-leg. (Kick-off at 7:45PM).

Following Bohemians stunning 3-0 victory over Dudelange last week, which earned them a further €550,000, 8000 supporters will descend on the Aviva once again, hoping their side can put in a good performance against the Greek giants.

After a Rob Cornwall header put Bohs ahead in a comfortable first half, the man of the moment Georgie Kelly put the tie beyond the visitors with two goals in five minutes. Kelly’s first, a smart header from a set piece was closely followed by a cool bottom corner finish, after Liam Burt’s dazzling 60-yard run. It was also Kelly’s second brace in a row at the Aviva, scoring twice versus Stjarnan a fortnight ago. Bohs saw the evening out with confidence after that. Even the ticketing arrangements were announced over the tannoy before the referee had blown for full time!

Those 8000 tickets went on sale the following day and sold out just 15 minutes after going on general sale.If the Gypsies perform as well as they did in their previous two Aviva outings, it promises to be another memorable night for the club from Dublin 7!

Bohemians manager Keith Long spoke to the media ahead of the clash, and said “we want to test ourselves against the best in Europe, they're a big club with massive support, and a very partisan support at home.

“It's a big occasion for the club, a huge step -up in terms of the opposition. We've got to try and be as diligent as we can in terms of our recovery and our preparation.”

Last week’s goal scorer Rob Cornwall also looked ahead to the tie, and said “it's great to get 8000 in, you can feel the buzz at the start of the game doing the warmup. It gives everyone a little kick.”

PAOK (Panthessalonian Athletic Club of Constantinopolitans) are based in Thessaloniki in northern Greece. They are one of the top sides in Greek football and have the third largest fanbase. They have won the Greek league title three times, most recently in 2019, and have been crowned Greek Cup champions eight times, with their latest win coming last May where they beat Olympiakos 2-1. Manager Razvan Lucescu is in his second stint in charge, having previously led PAOK to their first league title in 30 years in 2019.

Some fans may be familiar with their midfielder Shinji Kagawa, who spent two seasons with Manchester United, winning a Premier League title to add to his two Bundesliga’s he won with Borussia Dortmund. The Japanese international is currently six months into his 18-month contract with the Greek club.

In Bohemians two games at the Aviva in this campaign, they have scored six goals and kept two clean sheets.

Georgie Kelly has scored four of those goals, with Rob Cornwall and Liam Burt on the Lansdowne scoresheet too.

Both sides under 19 teams met in the 2019 UEFA youth league, with Ross Tierney, Dawson Devoy and Andy Lyons all featuring in a narrow 2-1 aggregate loss to PAOK.