Players, performances & penalties - The weekend that was in the FAI Cup 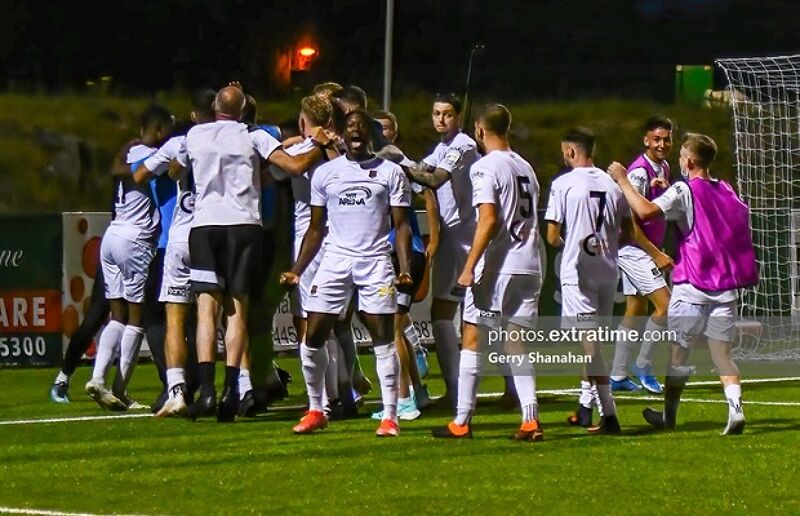 Ahead of tonight's FAI Cup draw, the extratime team took another look at this weekend's games.

Result of the Weekend

A team fighting at the top of the Premier Division against a team who had reached 'rock bottom' according to fancast The Other Three Amigos shouldn't have been a contest.

When they conceded a goal following a defensive mistake to open the scoring, this view was reinforced.

However, to their credit, Colin Healy's men came away with the win courtesy of goals from Beineon O'Brien Whitmarsh, Dylan Mc Glade and an 89th minute winner from Dale Holland and left Liam Buckley's men out of Europe and the FAI Cup at the end of a tough week.

Keep an eye out for

Bohemians changed ten of their starting lineup from their victory over Dudelange and showcased a number of their Academy products including goals from starting debutant Aaron Doran, Jamie Mullins and Dawson Devoy- the partnership with St Kevin's Boys certainly paying fruit on the day.

Mullins netted his second goal in a week following his strike against Longford Town last weekend.

Another ex SKB youngster, currently at Wexford, Jack Moylan found the net with a sublime individual goal in the Slaneysiders convincing 3-0 win over Cabinteely.

Shamrock Rovers II skipper last season, 20-year-old Darragh Nugent, is on loan at Longford Town and grabbed an assist in the league last week before scoring a fantastic effort in the Cup against Bangor GG.

Cork City's 21-year-old Beineon O'Brien Whitmarsh, who netted his second goal in his last four games and Derry City's Evan McLaughlin (19) - scorer of his side's winning penalty three weeks after netting on his league debut are another couple of players with a potential bright future ahead of them.

Rolling back the years

A number of former League of Ireland stars featured for non-league sides over the weekend. A decade after playing in the Europa League Group Stages, 32-year-old Gary McCabe is currently lining out for Kilnamanagh and netted a free kick in their victory over St Kevin's Boys. Ex League of Ireland teammates at the club include 36-year-old Conor Kenna.

While he may not have had the busiest of afternoons, 39-year-old Ger Doherty still kept a clean sheet on his Finn Harps debut as they defeated Fairview Rangers after extra time.

Performance of the weekend

With a debut hat trick, including THAT halfway line goal, the honour falls to Glen McAuley for his exploits against Waterford.

However, Paddy O'Sullivan- who netted three in Maynooth University Town's victory over Malahide United and Billy King with a brace and an assist in a comfortable St Patrick's Athletic victory also warrant consideration

After going down to 9 men, Drogheda United were moments away from hanging on for a famous victory against Derry City while comprehensive victories for St Patrick's Athletic (6-0 v Bray Wanderers), Longford (5-0 v Bangor GG) and Maynooth University (4-0 v Malahide) also deserve recognition.

The draw for the Second Round of the FAI Cup takes place tonight at 6.30pm with fixtures to be played on the last weekend in August.