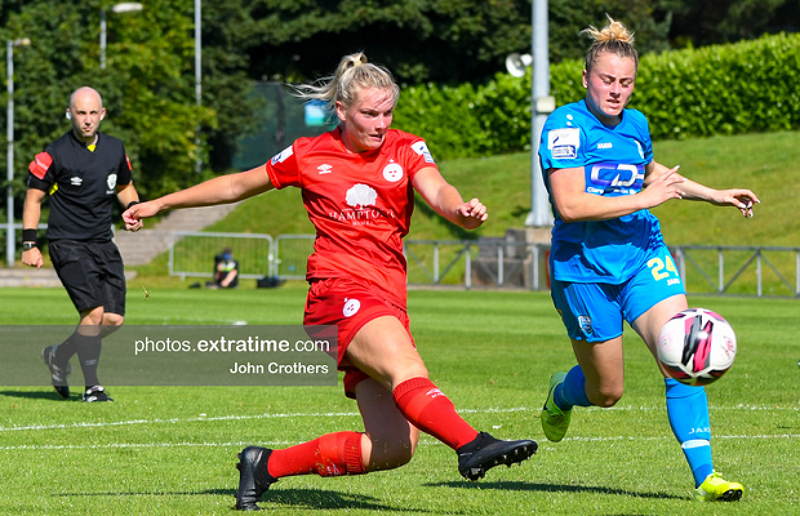 Saoirse Noonan of Shels rifles home the opening goal of the game during the Reds 2-1 win over DLR Waves at the UCD Bowl on Saturday, 17 July 2021. Credit: John Crothers (ETPhotos)

Shelbourne will be looking to keep their winning streak going when they host Treaty United at Tolka Park in the Women’s National League on Saturday (kick-off 2pm).

The Reds have won their last four games win a row and that includes a dramatic 4-3 victory over current Champions Peamount United.

Peas are still top of the table on goal difference but Noel King’s side could take the lead with a victory depending on how United get on in their game against Athlone Town on Saturday evening.

Saoirse Noonan opened the scoring for the visitors on the day with Rebecca Cooke scoring a late winner after Jetta Berrill equalised for Waves in the 67th minute.

A win should be expected in the Shelbourne camp this weekend but they will still have to avoid any complacency against an improving Treaty side.

Niall Connolly’s side have the two top teams in the country served up to them one after another in the WNL with the Limerick side coming off the back of a game against Peamount United last weekend.

Aoife Cronin scored her fifth goal of the season last Saturday, in between goals from Sadhbh Doyle and Eleanor Ryan Doyle in the first half to send Treaty in a goal behind at the break.

Peas showed off their dominance in the second half however, and the powered to a 5-1 win with Alannah McEvoy, Ryan Doyle and Karen Doyle all adding to the lead for the three points.

This will be another tough fixture for Treaty, but they have shown themselves well capable of packing a punch in this League and if they can stay tight at the back they may be able to give Shelbourne a scare on Saturday.

The Reds are unbeaten in their last nine Women’s National League games.

Shels have conceded the least amount of goals of any team this season with just seven goals against the side so far in 2021.

Treaty United have faced Shelbourne twice since they joined the WNL last year and they have lost both meetings.