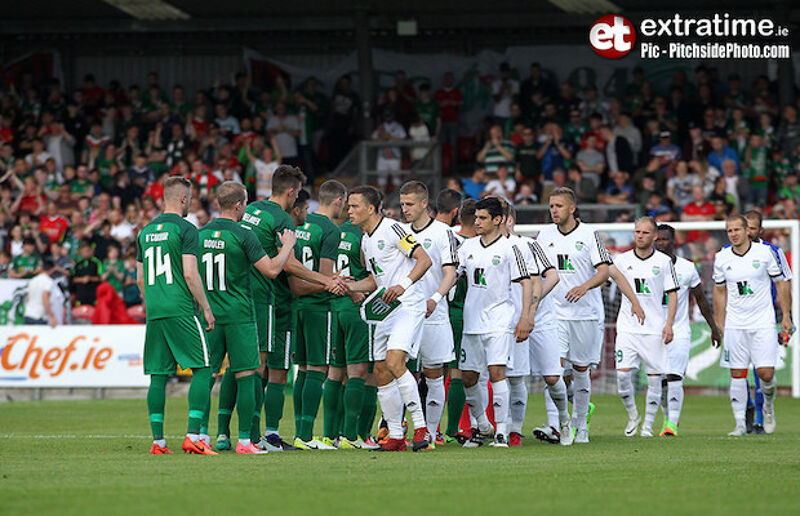 Levadia Tallinn in Turners Cross ahead of kick off of their 2017 European clash with Cork City Credit: Steve Alfred (ETPhotos)

The Lilywhites travel to Tallaght on Thursday evening to take on FCI Levadia Tallinn in the homw leg of their second qualifying round of the UEFA Conference League.

It is the second time that Dundalk have come up against the Estonian side in the last three seasons having beaten them 3-1 on aggregate in 2018.

Vinny Perth’s team come into the game with three wins in the their last four league matches and buoyed by their comprehensive 5-0 aggregate win over Welsh side Newtown in the last European round.

Perth has settled in over the last month into his second spell at the club and got rewards on the pitch with results picking up after a very poor start to the season.

“I’ve had seven games now in this four week period, we started to build, we slowly improved different things and different stages throughout the team within seven weeks,” said Perth speaking at Dundalk’s media event ahead of the European tie.

The Dundalk boss isn’t underestimating his opponents. “They like to score goals, they defend very well and they’re very attack minded. And they’re a very strong team. We would look at some of their players and see real threats, particularly in the wide areas. So they look very similar to ourselves, someone we have huge respect for.”

Perth described himself as “bitterly disappointed” that the home leg is not being played in Oriel Park - 1,000 will be allowed in Tallaght Stadium - but he noted that “it’s something as a club we know we need to fix, there is no shying away from that.

“There is a lot of good memories for our club (playing in Tallaght). We’ve had a lot of big moments up there. We won a trophy up there, we effectively sealed a league title up there, we had great European nights up there, so it has got a good feeling for us albeit this is a sort of new squad.

“We have done our work on Levadia Tallinn and I played against them last year, they are a tough side with some very good players,” said Nattestad speaking to Dundalkfc.com. “They had a good win in the last round and are very experienced.

“We are playing well now though and we had a good win over Newtown. That was a tough tie so we were happy to get through and into this round. The plan is to get through again which is their aim too.

“We know we are playing well and we are confident that we can get through to the next round, we want to win on Thursday.”

Tallinn have lost just two of their 17 league games so far this season and sit four points clear at the top of the table. In the last round, the 3-1 home win was crucial as they eliminated Gibralter side St. Joseph's 4-2 on aggregate.

The Estonian side, who finished third in the Meistrilliga last season, trained in Tallaght Stadium on Wednesday evening.

“Dundalk is a team that is very well prepared physically,” was Head Coach Vladimir Vassiljev’s assessment of the Lilywhites speaking to his own club's website.

“They have fast men who like one-on-one duel in both defense and attack. They play very straightforwardly, trying to attack the space behind them.

Zakaria Beglarishvili is one to watch for Dundalk as the Georgian international has scored 14 goals from 16 league games this season and got the opener in the 3-1 home win over St. Joseph’s in the last round. Estonian striker Robert Kriss is on nine goals for the league campaign will be another player that the Lilywhites will need to keep tabs on.

The winners of this tie will take on Dutch side Vitesse Arnhem in the next round with the tie to be played on 5 and 12 August.

Levadia have won their last six league games in a row.

The Estonian club have played League of Ireland sides on six occasions and have only progressed once when the beat Bohs in 2004.

Following the win in the last round, David McMillan is now Dundalk's all-time leaging goalscored in Europe with a dozen goals.