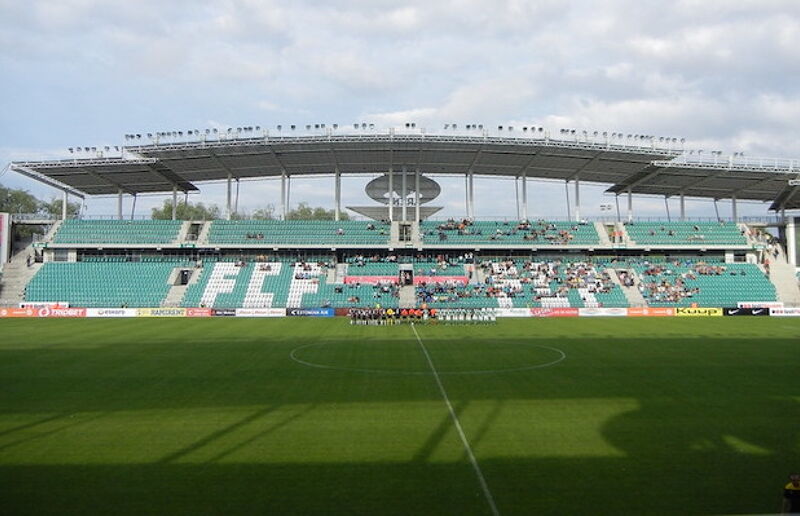 On Thursday Dundalk will take on Estonian side FCI Levadia Tallinn in Tallaght Stadium in the UEFA Europa Conference League second qualifying round first leg.

So who are FCI Levadia Tallinn?

FCI Levadia, who play in the 14,000 capacity A. Le Coq Arena, is a merger formed after the 2017 season of the two Tallinn clubs FCI and Levadia who finished fourth and second respectively in the ten team Meistrilliga that year.

They finished third in the league last season to earn them a place in the inaugural UEFA Conference League.

They earned their spot in this round after a 4-2 aggregate win over St. Joseph’s from Gibraltar. They last time they progressed through a round in Europe prior to this year was the 2016/17 Europa League when they beat Faroe Island side HB 3-1 before losing the next round on away goals to Slavia Prague.

Levadia were recently eliminated in consecutive seasons by League of Ireland sides.

Who to watch out for?

Georgian international  Zakaria Beglarishvili has scored 14 goals from 16 league games this season and got the opener in the 3-1 home win over St. Joseph’s in the last round. Estonian striker Robert Kriss is on nine goals for the league campaign.

They are captained by Brent Lepistu who has been capped 13 times at international level with Estonia. He was sent off for two yellow cards in the first leg against St. Joesph’s and missed the 1-1 drawn second leg due to suspension.

The winners of this will take on Dutch side Vitesse Arnhem in the next round with the tie to be played on 5 and 12 August.

What are their most recent results?

Levadia are top of the Meistiliiga four points clear of Flora Tallinn and have won their last six league matches in a row. In their 17 matches played so far this season, they have only dropped eight points.

It is a team of Czech officials for Thursday’s game in Dublin 24. Miroslav Zelinka will be the referee.

Next up for the League of Ireland sides in Europe - Europa Conference League review https://t.co/17qtvzoFHv pic.twitter.com/hXBQzFsGEb