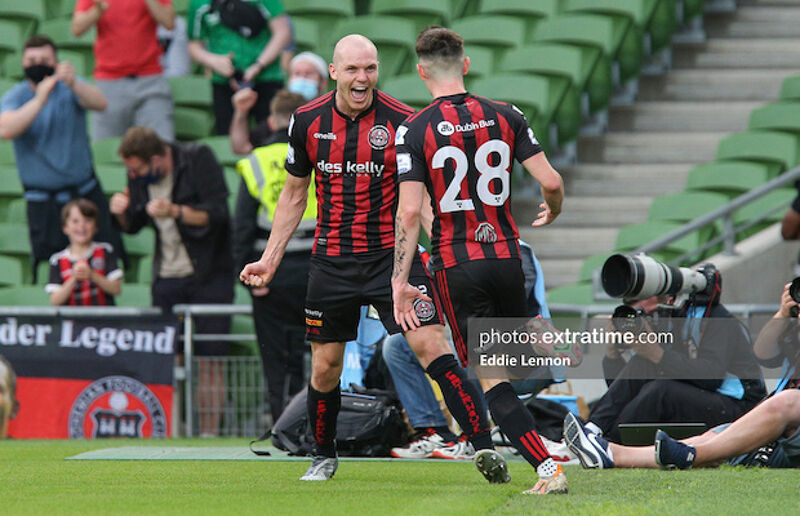 Dundalk, Bohemians and Shamrock Rovers continue the League of Ireland representation in Europe over the next few weeks.

UEFA made the draw for that third round on Monday and details of who Rovers will face – and the teams Bohs and Dundalk will play should they progress – are noted below as we look ahead to the Irish club’s next fixtures.

Away supporters will not be at any of these games as UEFA have banned travelling fans from the qualifying stages - including the play-off round which comes after the third qualifying round - with spectators set to return for the group stages of UEFA's club competitions in September.

Dundalk easily overcame Welsh club Newtown Rangers in the first qualifying round stage, winning 5-0 on aggregate, but will find the Estonian team much stiffer opposition.

Levadia are currently top of the 10 team Estonia Premier League, known as the Meistriliiga, having won 14 of the 17 games played so far in their season.

They overcame Gibraltar side St Joseph 4-2 on aggregate in the previous round, winning 3-1 at home in the first leg and drawing 1-1 away in the second leg.

Levadia are considered one of the top two sides in Estonian football, alongside Flora Tallinn, but they do not have any representatives on the current Estonian Senior International team.

Interestingly, one of Dundalk’s squad, Ravis Jurkovskis, is a full Estonian international who has played 16 matches for his country.

Vinny Perth has brought some stability back to Oriel Park since his arrival for his second time in charge. They have been on a decent run of form over the last month, only losing once, 3-1 to Shamrock Rovers, in a seven-game sequence that included the home and away legs against Newtown Rangers.

These two sides met previously in the first qualifying round of the 2018 Europa League, the Co Louth side winning 1-0 in the away leg (Dylan Connolly, now of St Mirren scoring the goal) and 2-1 in the home leg (Pat Hoban and Michael Duffy the scorers).

A limit of 1,000 supporters has been set for the game in Tallaght stadium which has an 8 pm kick off, and the winners of the two-leg tie will then face Vitesse Arnhem from Netherlands in the third qualifying round.

Bohs will face Luxembourg side F91 Dudelange in the second qualifying round first leg in Luxembourg on Thursday July 22nd with the second leg pencilled in for the Aviva Stadium on July 29th.

Bohs had a comprehensive 4-1 aggregate win over Icelandic side Stjarnan in the first qualifying round, the 3-0 home leg win in front of 6,000 supporters at the Aviva being particularly impressive.

Dudelange play in the Luxembourg National Division and finished second in the 2020/21 competition, amassing 66 points in the 30-game competition, two points behind winners Fola Esch.

There is a very multinational make up to their squad, as well as natives from Luxembourg, there have players from across Europe, Germany, Belgium and France for example, but also from Burkino Faso, Tunisia and Cape Verde.

Close followers of the LOI will recall their last visit to Ireland back in 2015 when they clashed with UCD in the first qualifying round of the Europa League.

The students won the first leg in Belfield 1-0 (Ryan Swan, now of Warrenpoint in the NIFL scoring the only goal) and while they lost 2-1 in the away leg, they went through to the next round on the away goal rule.

Ryan Swan also scored in the second leg and while they played over 60 minutes of that match with 10 men after one of their players was red carded, that Swan away goal was enough to send them through to the next round

Bohs had a shaky start to the 2021 season but have really come good during the summer months and now sit in fourth place in the league table on 31 points, 10 points off joint leaders Shamrock Rovers and St Patrick’s Athletic.

The wide-open spaces of the Aviva Stadium certainly seems to suit their style of play and if they can perform in the away leg in Luxembourg this week, they will be confident of another positive result in the home leg one week later.

The reward for winning over the course of the two legs is a tough game against PAOK of Greece in the third round.

The Hoops overcame the disappointment of their exit from the Champions League at the hands of Slovan Bratislava by getting a very favourable draw in the third qualifying round of the Europa Conference League.

Rovers went straight into the draw for the champsions section of the third round thanks to a bye while fellow LOI sides Dundalk and Bohemians have to compete at the second-round stage.

The Tallaght side have been drawn against the winners of the second-round clash of Tueta who are from Albania and Inter Club d’Escaldes from Andorra.

Ireland is currently ranked 47th in the FIFA World Rankings while Albania is ranked 66th and Andorra 147th, so on paper at least Rovers should be able to deal with whichever side comes through the second-round tie.

Tueta won the Albanian Premier League (known as the Kategoria Superiore) in May 2021, winning 27 of their 36 matches to finish on 66 points, the same points total as Vllazia but with a slightly superior goal difference.

By virtue of winning the league title, they qualified for the Champions League but suffered a heavy first round defeat to Moldovan side FC Sheriff Tiraspol. They were beaten 4-0 at home in the first leg and lost the second leg on a 1-0 score line.

The eight team Andorran Premier League (the Primera Divisio) was shortened to a 14-game competition this season due to Covid-19 related restrictions, and Inter Club d’Escalades won the league winning seven of the 14 matches to finish on 26 points, two points ahead of the second placed team.

These two teams meet with Tueta at home in the first leg on July 22nd while the second leg will be in Andorra on July 27th.

Rovers recovered from being 2-0 down to Derry City in their last league match to finish strongly and win 4-2 and apart from the Bratislava defeats they are on an impressive run of form having lost only three league games from the 20 played so far this season.

The third-round qualifying ties will be played on August 5th and 12th.