Bohemians' European run to continue at the Aviva Stadium 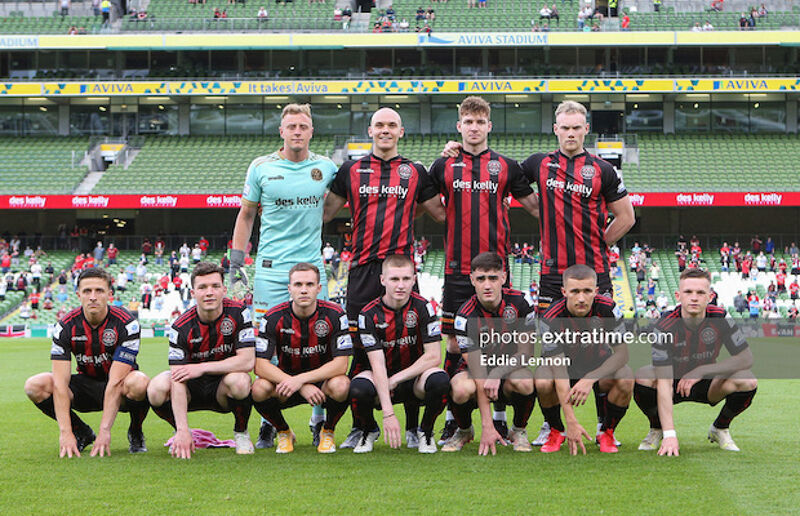 Bohs team ahead of kick-off in the second leg against Stjarnan Credit: Eddie Lennon (ETPhotos)

The Europa Conference League second qualifying round second leg between Bohemians and Luxembourg side Dudelange will take place in the Aviva Stadium on Thursday 29 July (kick off 7.45pm).

The Gypsies progressed through the first qualifying round last week with a 3-0 second leg win over Stjarnan in the Aviva Stadium in front of 6,000 spectators having drawn 1-1 away in Iceland in the first leg.

The capacity for this next match in the Aviva and the ticketing arrangements will be confirmed on Tuesday.

Keith Long’s side should they beat Dudelange will play Greek side PAOK in the third qualifying round following Monday’s draw with that round set for the 5 and 12 August.

“I again want to thank the FAI and the Aviva Stadium for their help in making this fixture possible,” said Bohs COO Daniel Lambert on Monday.

“The 6,000 in attendance for Bohemians v Stjarnan last Thursday created an atmosphere to remember - a night that will live long in the memory of supporters and players after an agonising 16 months apart and we look forward to more of the same on July 29th when we will again ask our fans to comply with all FAI protocols and Government guidelines on the safe return of spectators to Irish sport.”

In a statement about the fixture released by the FAI, League of Ireland Director Mark Scanlon said: “This latest announcement is another step forward for our game as we edge back to normality and work with all our stakeholders on the return of supporters to our grounds in significant numbers. I again want to thank the Government and their agencies, the clubs and our own FAI staff for their hard work to date on this pilot scheme and look forward to another great European night in Dublin.”