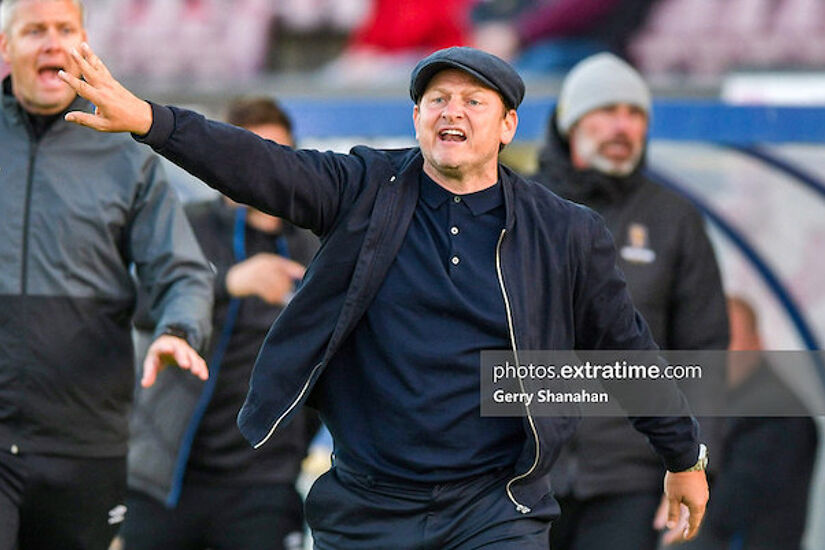 Marc Bircham: ‘Hopefully we can enjoy the weekend and watch football come home’

Waterford FC recorded their first away clean sheet of the season as they left Finn Park with a 1-0 victory over Finn Harps on Friday night at the start of what Marc Bircham is hoping will be good weekend for his football teams.

In his first start for the club, Junior Quitirna scored the only goal of the game from the penalty spot in first half stoppage time for Waterford after Darragh Power was fouled in the area.

Speaking after the match, Blues boss Marc Bircham noted that the clean sheet is a very pleasing aspect of their victory away from home.

“We’ve worked on our shape, on our collective defending,” said Bircham. “We’ve been working on it for a while and tonight I thought we looked comfortable other than maybe a few set-pieces and that is a big difference from the side that played Finn Harps last time.”

Bircham worked with Manchester City’s Raheem Sterling and Eberechi Eze of Crystal Palace at the QPR academy and he noted that Junior Quitirna reminds him a bit of the latter.

“Once Junior gets fully fit, there is a talented individual there. It was a very good penalty for a young lad, that shows some ability in itself.

“With Ebere Eze when he gets on the ball, he’s not the quickest but he glides past people and I see very similar traits in Junior.”

Both sides were given spot kicks in this encounter with Waterford converting theirs prior to the break while Finn Harps failed to capitalise after the restart. Barry McNamee his penalty saved by Matthew Connor.

Bircham noted that he had a gut feeling that penalties would play a part in this match.

“With our one, I felt it was a definite penalty as their defender just ran through the back of our player. With their penalty, I thought we’d just cleared the ball and there weren’t many appeals.”

Derek Tomney looked hesitant in giving both penalties with Bircham adding, “I thought he wasn’t going to give ours but he did and Matthew (Connor) has also saved a penalty and kept a clean sheet.”

Next up for Waterford will welcome Sligo Rovers to the RSC but Bircham isn’t focusing on that just yet.

“Hopefully we can enjoy the weekend, watch football come home and then concentrate on Sligo,” he joked.