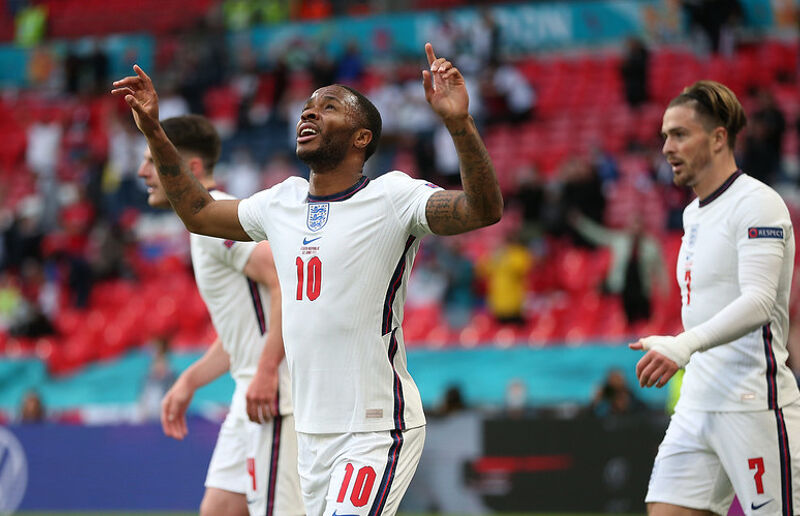 England will have the opportunity to welcome football home on Sunday night as they booked a Euro 2020 final date with Italy thanks to a 2-1 extra-time win over Denmark.

Harry Kane scored the decisive goal in contentious circumstances late in the first half of the extra time after Kasper Schmeichel had saved his initial penalty kick.

Referee Danny Makelie had awarded a spot-kick after Raheem Sterling appeared to be fouled in the box by Denmark midfielder Pierre-Emile Hojbjerg.

The Danes had led late in the first half after a rocket of a free kick from Sampdoria midfielder Mikkel Damsgaard saw Jordan Pickford beaten for the first time in the tournament.

England hadn’t conceded a single goal in their first five games but Everton keeper Pickford was helpless to keep out the 21-year-old’s furiously-struck effort from 25 yards.

The hosts were behind for only ten minutes as they levelled through an unfortunate ricochet from Denmark captain Simon Kjaer.

Schmeichel had denied Sterling from close range moments earlier after he was teed up by the lively Kane, but he was powerless to stop Kjaer from inadvertently turning home a Bukayo Saka centre.

England had started the game slowly but slowly gained the upper hand through the second half but Denmark held firm and forced extra time.

The midway point in the additional 30 minutes was about to elapse when Sterling surged in from the right endline and beat Joakim Maehle before falling under Hojbjerg’s challenge.

Replays showed there was little, if any, contact and there was a second ball on the pitch that may have also interfered with play, but the spotkick stood.

Schmeichel went the right way and kept out Kane’s tame sidefooted effort, but he couldn’t hold onto the ball, and Kane forced home the rebound to book a place in the final.

"I'm so proud of the players. It was an incredible occasion to be a part of," said England manager Gareth Southgate.

"We said to the players that we would have to show some resilience, that they would have to recover from some setbacks, and we did that."

Kane added: "Unbelievable – what a game though, credit to Denmark. We dug deep and we got there when it mattered. We reacted really well.

"We're in a final at home, what a feeling. We know it's going to be a very tough game against Italy. We've had a great tournament so far. One more game to go at home, and we can't wait."

#Respect between at Wembley. #EURO2020 pic.twitter.com/rvfFrVRTrQ