Luke Byrne: 'We are delivering at the moment, but we have to keep doing our jobs' 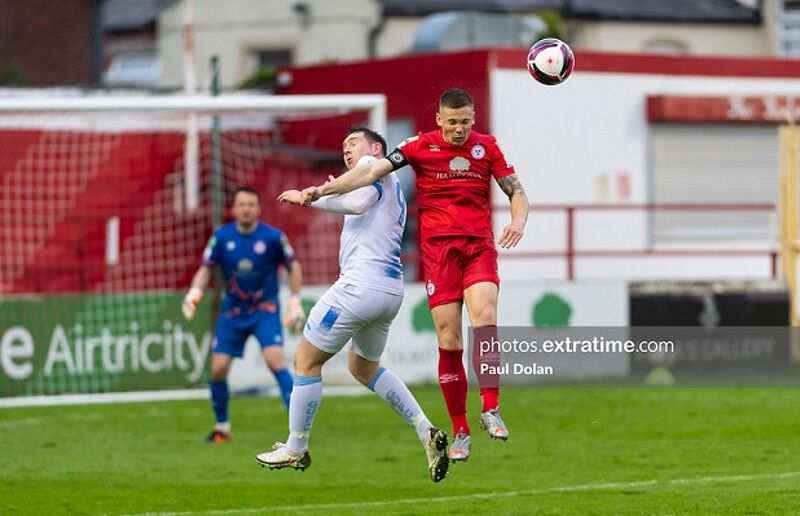 Shelbourne captain Luke Byrne is acutely aware that the Reds must keep their focus and momentum in check as they continue to push clear in the race for the First Division title.

After a quick start to the season, Shels are showing no sign that their pursuit of promotion to the top-flight is slowing down.

Friday’s 2-1 win over Cork City was a clear indication of that as Shelbourne rarely looked in danger, extending their lead at the top of the table to 11 points in the process.

“It does (feel like a big night), Byrne told extratime.com. “But to be fair the last few weeks have felt the same.

“There’s a lot of teams that are in and around each other and the fixture list has pitted them against each other the last few weeks. They’re all taking points off one another.

“They’re struggling to go on consistent winning runs and in the meantime, we have kept doing our job and winning games.

“That gap has gone from five points to 11 really quickly. We’re ahead of where we were for the first round of games, so the aim now is to beat the total we had in the first series.”

The win was Shels’ 7th win on the spin – and also their fifth home league win on the trot and they are showing little of sign of getting carried away despite their imperious run of form.

“We’ve a very professional dressing room – and it’s the same message every week,” Byrne explains. “It’s about winning the game in front of you and then the next one all the time.

“We don’t think about who is playing who or what is happening in the league table. All we can do is control what has been happening on a Friday night and we’ve been doing that.”

In 2019, Byrne was part of a Shelbourne side that won the First Division by a total of 9 points.

But they are now 11 clear in a league that was tipped to be the most competitive ever, and the 27-year-old admits he feels this Shels class of 2021 is a cut above their 2019 side who also won a very competitive division.

“The team of 2019 was by no means a poor team – it was a good team in a very competitive league, and we won it, and well.

“So, this team has to win the league. I think it is a better squad and I think it has more options in it. It can play different ways and in key areas it’s a bit stronger.

“That’s no disrespect to anyone that was here it’s just the reality that this is a very strong squad. We’re delivering at the moment, but we have to keep doing our jobs.”

He added: “It probably wasn’t a bad thing to go under the radar a little bit. In 2019 everyone was saying that we were going to run away with it and after 7 games we were about 5th.

“I can’t stop people think who they think will win it, but it doesn’t bother us at all. We knew that we could compete with any team in the league.

“But nothing has been won yet. We just have to focus on the next game.”