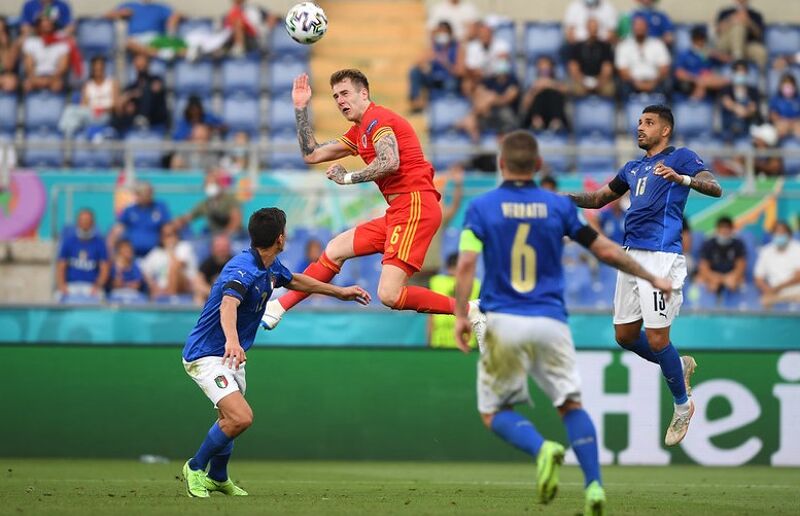 Joe Rodon of Wales wins a header whilst under pressure from Matteo Pessina and Emerson of Italy during the UEFA Euro 2020 Championship Group A match between Italy and Wales at Olimpico Stadium on June 20, 2021 in Rome, Italy. Credit: Chris Ricco - UEFA/UEFA via Getty Images

Italy and Wales both qualified for the knockout stages of Euro 2020 after the Italians mustered up a 1-0 win in Rome with Wales’s qualification being helped by the outcome from the other Group A match in Baku between Turkey and Switzerland.

Italy was already through to the knock out stages after their first two matches so they could afford to make eight changes to their starting line up and still put in a thoroughly convincing performance over the course of the 90 minutes.

This performance confirmed the strength in depth that manager Roberto Mancini has at his disposal and is one of the reasons why they are now considered one of the favourites to win the tournament.

Wales on the other hand left out three players who were all on yellow cards, obviously with an eye to the last 16 stages, albeit that making it out of the group phase was still dependent on the result of the Turkey v Switzerland clash taking place in Baku.

Italy was on the front foot from the very beginning of the match while Wales had all 11 players in their own half for most of the opening 45 minutes, playing five across the back with another bank of five just ahead of them, a very conservative approach.

Frederico Chiesa was a constant danger for Wales on their left flank and the Juventus player gave Neco Williams a torrid time with his pace and trickery. Chiesa almost opened the scoring in the 29th minute when he cut inside Williams and flashed a shot across the goals that was only inches wide.

The Italian pressure finally paid off in the 37th minute when Joe Allen gave away a free kick by fouling Verratti on the edge of the box. Verratti took the free kick himself, a low hard shot in front of the Welsh wall which Matteo Pessina diverted past Danny Ward in the goals.

Pessina almost had a second five minutes later but he was unable to get a touch to a fine pass from Federico Bernardeschi.

Wales only had one attempt on goal in the whole of the opening 45 minutes, Chris Gunter getting on the end of a David James corner in the 26th minute but his header went wide and did not trouble Italian keeper Gianluigi Donnarumma.

Wales had another let off in the 58th minute when Bernardeschi’s free kick came off the post and went wide. Allen again the culprit after fouling Andrea Belotti outside the box.

Things went from bad to worse for Wales in the 59th minute when Ethan Ampadu was red carded after a late tackle on Bernardeschi. The red card seemed harsh as there were other similar tackles from both sides over the course of the 90 minutes that went unpunished but Romanian referee Ovidiu Hategan was in no doubt on this one and Ampadu was disconsolate as he was forced to make the long walk to the dressing rooms.

Wales introduced the powerful striker Kieffer Moore for Joe Morrell on 59 minutes and this signalled a more attacking threat from Rob Page’s side for the final half hour of the match.

Moore created Wales’s best chance, and only chance of the second half, in the 75th minute. He headed the ball across the box to an unmarked Gareth Bale but the Welsh captain blazed the ball over the bar even though he had received the ball on his favoured left foot.

Italy will be very hard to beat as they progress into the knock out stages while Wales will need to show a vast improvement on this display if they are to have any hope of reaching the quarter finals.