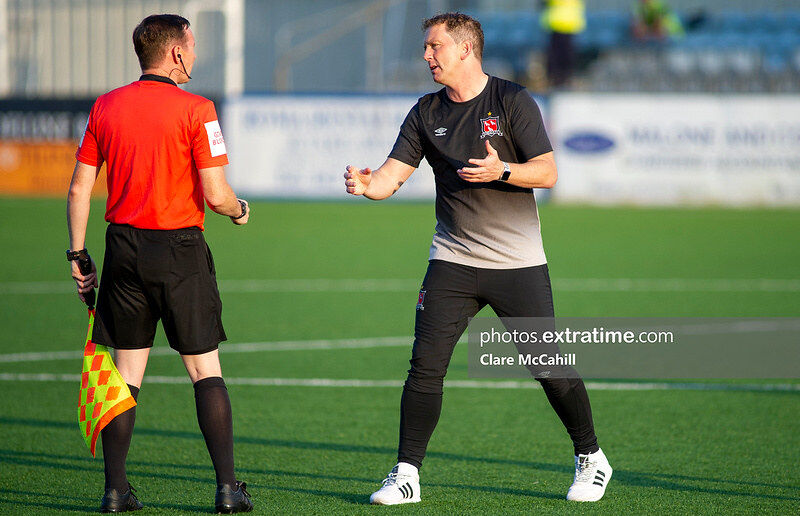 Vinny Perth is back in the hot seat at Oriel Park. Credit: Clare McCahill (ETPhotos)

For the second time in two weeks, Dundalk failed to win over bottom of the table opposition. Two first half goals from Aaron McNally and Chris Shields saw the points shared at Oriel Park.

There was considerable pressure on this Dundalk side going into this game, having suffered a humiliating defeat to struggling Waterford last week. Their assignment seemed straightforward enough, beat the team bottom of the table. Not too tough you’d think when you’ve the largest wage budget in the league. Mind you it was the same assignment last week and Waterford climbed off the foot of the table only courtesy of the three points they claimed over Dundalk.

There were plenty of eyes on the side-line of this game too. Following the exit of Filipo Giovagnoli as Dundalk manager, and the reluctant standing-in of Jim Magilton, there had been increasingly frustrated calls to appoint a manager to try and settle their erratic form. Dundalk did assign a manager, although the appointment wasn’t without controversy: Vinny Perth returned for his second spell as the man in charge of the Louth side for this game. But it was far from a dream start.

Dundalk began much the brighter of the two sides and almost went in front after six minutes from a Daniel Kelly effort, squared to him in the box from Darragh Leahy. But the Lilywhites were stunned on fourteen minutes when Longford took the lead through Aaron McNally.

The goal came as Dundalk were caught on the break. A great cross from Paddy Kirk was only bettered by an excellent finish, which rocketed into the bottom left corner past the helpless Alessio Abibi in nets.

Longford could well have gone two up soon after. Dean Byrne’s curling shot hammered off the cross bar just after the twenty minute mark. And Dundalk fans could be forgiven for getting that sinking feeling that has become all to familiar this season.

Parity was restored on the cusp of the half hour. Chris Shields grabbed the game by the scruff of the neck and nodded home from a corner. An important captain’s goal.

The Railwaymen enjoyed the lion’s share of possession but didn’t create any chances of note in the remainder of the first half and they looked vulnerable when Longford intercepted the ball and broke at pace.

The pattern would continue in the second half. Dundalk with plenty of possession but little end product. Lee Steacy looked composed in nets and made an impressive double save to a Patrick Hoban penalty and subsequent rebound effort.in the 73rd minute.

At the other end, Alessio Abibi, had a quieter time of it, but was called upon for a heroic of his own minutes later, when he had to make a point blank save yards out to foil Aaron Dobbs. The ball turned onto the post before Sam Stanton cleared off the line.

Part time Longford didn’t wilt noticeably in the closing twenty minutes against their professional hosts. The adrenaline of a rare win in Oriel no doubt playing a part – this point could be an important one for them staying in the Premier Division.

That said Dundalk rallied, although too little too late, with shots from Grett Sloggett and Patrick Hoban testing Steacy’s reflexes and Michael Duffy almost teased a flicked effort into the net in the 94th minute. A winner wasn’t to be found.

The point brings Longford within a point of Waterford. It also puts Dundalk closer to a relegation battle than a European place.