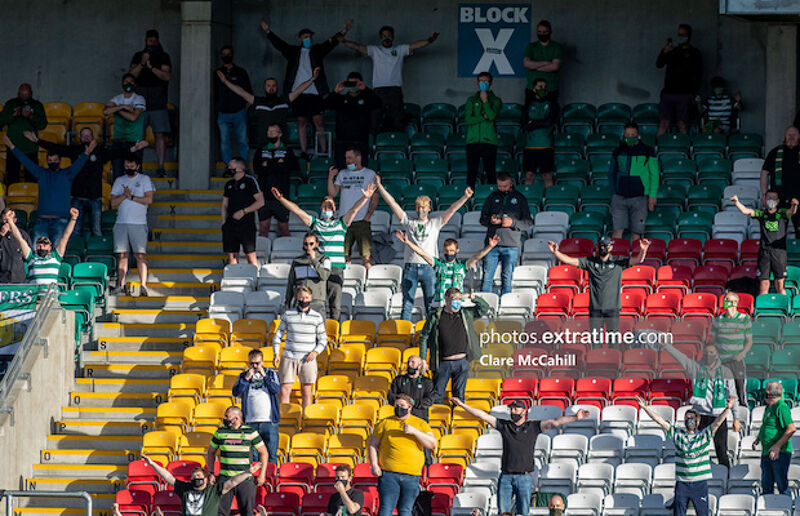 Shamrock Rovers thanked their fans for the success of the return of fans test event in Tallaght Stadium last Friday night while hitting out at what they see as ‘concerted anti-Rovers background noise’.

The two SSE Airtricity League clubs playing in grounds with a capacity above 5,000 spectators all-seated were included in the list of the government’s 16 pilot sporting events for the safe return of spectators as Ireland exits COVID-19 restrictions.

Elsewhere on Friday, depending on stadium capacity, 100 or 200 supporters were allowed to attend the matches in the League of Ireland.

The Hoops have a licence arrangement to play their home games in the South Dublin County Council owned stadium – with the venue hosting COVID-19 testing over much of the 12 months.

extratime.com understands that a number of Premier Division clubs made known their unhappiness with the plan for Tallaght Stadium to be used as a venue for such test events.

‘Despite a build-up which featured the usual concerted anti-Rovers background noise we have come to expect since the creation of the Shamrock Rovers II team in late 2019, the successful pilot vindicated the decision of the government in organising these games in Tallaght Stadium.

‘We delivered for the political and football authorities and for the league as a whole and have cleared a path for the return of fans to ALL League of Ireland grounds in the not too distant future.’

The club expressed their thanks to the supporters and all those involved in running the event in their statement published on their website:

‘We are extremely proud to have successfully carried out the pilot test “return of fans ” operation at last Friday’s game. Huge credit is due to our club staff, stadium staff, FAI staff, ticketing provider, other stakeholders and our matchday volunteers who all played a significant part in devising and implementing the plan to the highest standards.

‘Thanks also to the 1,000 fans present for adhering to the procedures and ensuring that Friday night’s test was passed with flying colours.’

Cork City tweeted their thanks to those supporters who attended their test event at Turner’s Cross last Friday.

‘We'd like to thank everyone who attended tonight’s game in Turner’s Cross, and we hugely appreciate your patience and cooperation with the health measures. It was wonderful to have our supporters back in the stadium and we hope to welcome more of you back very soon. Stay safe!’

For Rovers’ next home game against Drogheda United on 25 June another 1,000 spectators are set to attend and the WNL match the following day in Tolka Park between Shelbourne and Cork City is also being used as a test event.