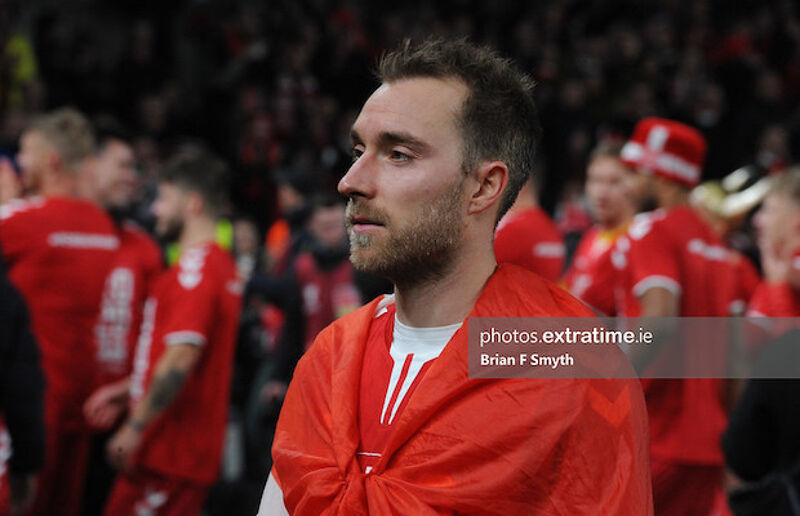 The Finns claimed a win in their first ever European Championship match but the event was completely overshadowed by the collapse on the field in Copenhagen of Christian Eriksen just prior to half time.

Thankfully the Danish FA were able to confirm after the match that the strikers’ condition in hospital is stable.

In the game itself it was a second-half goal by Joel Pohjanpolo that allowed the Finns claim all three points and temporary lead of Group B. It also gave them a rare victory over their Scandinavian rivals.

Denmark had been the side on top for most of the first half. Lukas Hradecky was called on a number of occasions to deny the home side, notably from an effort just outside the area from Jonas Wind. Not long after he tipped over a header from Pierre-Emile Hojbjerg as Denmark began to squeeze the Finns with their passing game.

Eriksen had been a key part in this early dominance as Finland struggled to retain possession in midfield. He tested Hradecky again with a low drive after the defence had failed to clear properly.

The away side begun to come more into the game with Teemu Pukki a constant threat. He threatened to break away, only for Simon Kjaer to pull him back. Surprisingly, referee Anthony Taylor only awarded a free.

The game was finely poised at that stage. Eriksen had chased back from the Finnish area when he suddenly fell to the ground. The obvious distress from his team-mates and all on the pitch was quickly apparent with the seriousness of the incident.

He had treatment on the field as both sides left the field. The authorities later took the decision to continue with the game upon the approval of the two sides.

Any sort of pattern had gone out of Denmark’s play as, unsurprinsingly, they still looked visibly shaken. Eriksen’s replacement, Mattias Jensen, tried his luck from distance but only failed to put it over the bar.

Finland then grabbed the lead. Pohjanpolo rose to meet a cross from the left and headed towards goal. Kasper Schmeichel was unable to keep it out as it trickled through his legs.

Denmark tried desperately to get back into the game. They were provided an ideal opportunity to do so when Yussuf Poulsen went down in the area. It seemed to be a soft award, but VAR was not consulted. Hojbjerg stepped up to take it. His effort was low and lacking power which Hradecky was able to palm away.

Finland was able to see out the game despite late pressure. They come up against Russia next on Wednesday in St. Petersburg. Denmark must try and recover as they take on Belgium at home on the same night as everyone’s best wishes go out to Eriksen in his recovery.