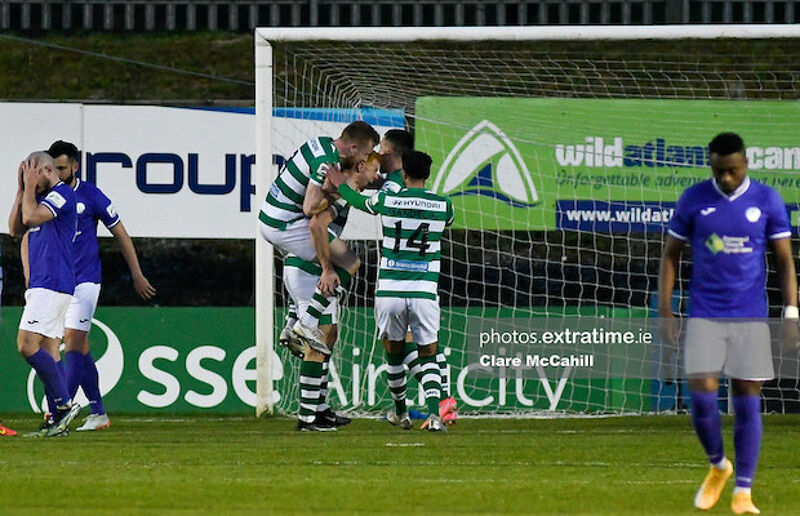 Four points out of a possible 12 is hardly title winning form but that was exactly the outcome from the last four games for Shamrock Rovers before the mid-season break began.

They were five points ahead of their nearest challengers at the top of the table at one stage this season but that gap evaporated completely after losing their 33 game unbeaten record to Dundalk and following that with a home defeat to Sligo Rovers. It meant they went into the break in second position, one point behind the new league leaders Sligo Rovers.

The situation could even have been a lot worse for the Tallaght side for with 94 minutes on the clock in their last game away to Longford Town, they were on course for a scoreless draw.

However Rory Gaffney scored his fifth of the season to break the hearts of De Town with a 95th minute goal, drilling home from close range after town keeper Lee Steacy had parried a Lee Grace header into his path.

“I think our performance on the day deserved the three points,” was Stephen Bradley’s assessment of the game against Longford. “I thought some of our play was very good. We missed a lot of chances, 'keeper made one or two good saves, so I felt in the end we deserved the win.”

A study of the substitutes bench in the Longford game reveals a lot about Rovers’ predicament in the run up to the break, and while the likes of Aidomo Emakhu, Dean McMenamy and Cole Omorehiomwan are good under-19 players, they would not all expect to be so close to first team action this early in the season.

The reason they were on the bench is due to the long list of injuries that Rovers have encountered in recent times.

Hoops Head Coach Stephen Bradley has had to plan without Dylan Watts, Ronan Finn, Sean Kavanagh, Joey O Brien and Chris McGann at various stages, Sean Hoare was also suspended for the Dundalk and Sligo matches while Neil Farrugia is a long-term injury concern and those players all remain out.

Friday sees Tallaght being used as a test event for the return of fans with 1,000 spectators set to attend the game. “We're really looking forward to it,” said Bradley about the returns of fans.

“The fans are excited, we're excited. We're really looking forward to seeing the fans again. It's going to be a bit of a strange feeling to have them there, but we can't wait to see them, hear them, and feel the energy because we've missed that.

“Football hasn't been the same without the fans and it's great now that we're starting to see some light at the end of the tunnel in terms of having them back at Tallaght Stadium.”

Harps had the very same type of lead in to the break as their opponents this Friday might, picking up four points out of a possible twelve with a lost two, won one and drawn one record.

They also topped the league table fleetingly earlier in the season but have since had a drop off in performance levels and now sit in sixth position on 18 points.

Harps won’t have been too disappointed to lose 2-1 to table toppers Sligo Rovers in their last match.

They were much too strong for Waterford even though only winning by the odd goal in three, but it was in the game at home to high flying Drogheda on 21 May that manager Ollie Horgan will have been most disappointed not to have picked up even a solitary point.

They were on course for a deserved 0-0 draw only for former Dundalk stalwart Dane Massey to thunder home a free kick in the dying seconds of the match for Drogheda and give them maximum points.

Harps also had claims for a penalty waived away by referee Derek Toomey after Tunde Owolabi looke to have been fouled in the box by James Brown close to the end of the match and to add insult to injury they also had David Webster sent off having received two yellow cards.

Horgan’s side also face a difficult four match sequence on the resumption of the season, as well as Rovers away this Friday night, June 11th, they also have to face an improving Derry City and third placed St Patricks Athletic, with an away game also in Longford Town later in June.

Finn Harps have not beaten Shamrock Rovers in any of their last eight clashes, either home or away, going back to March 2019, and in fact we have to go as far back as 2008 to find the last time Harps managed to draw with Rovers.

They played out a 1-1 draw in Finn Park in May 2008, a certain Padraig Almond (now of Newport County) gave Rovers the lead only for Conor Gethins to level it and secure the point for Harps. Harps were actually managed by Paul Hegarty at the time and he is still centrally involved with the Harps set up being manager Ollie Horgan’s right-hand man as assistant manager

In their most recent match at Finn Park back in April 2021, Rovers came out on top on a 2-0 score line. Rovers equalled the all-time league record of going 30 games without defeat when they defeated Harps in that match.