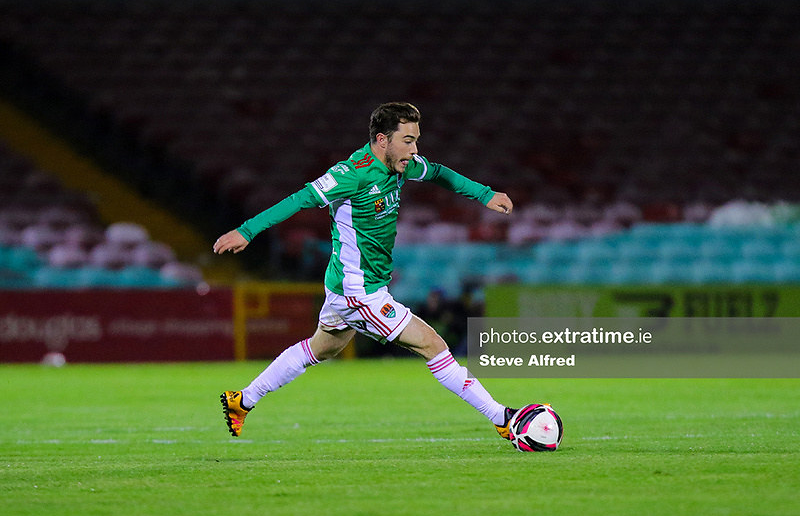 Cory Galvin in action for Cork City during a 2-1 victory over Cobh Ramblers at Turner's Cross on March 26, 2021. Credit: Steve Alfred (ETPhotos)

The Rebels will be looking to end a three game run without a win when they host Cabinteely at Turners Cross on Friday night (kick-off 7.45pm).

This fixture will have a bit more weight behind it as the stadium will host fans for the first time since October 2020 with 600 fans in attendance for Friday night’s game.

Cork have already faced Cabinteely this season, the Dublin side ran out 1-0 winners at Stradbrook in April in the first ever League meeting between the teams.

The Rebel's last fixture was a Cork Derby meeting between themselves and Cobh Ramblers.

Colin Healy’s side were beaten 1-0 at St Colman’s Park thanks to a Jack Hegarty goal and the manager will be looking for a win on Friday night to try and move closer to the playoff spots, with City currently six points behind fifth place Cabinteely.

“It’s been tough playing behind closed doors, but we had to deal with it. There’s no other team in the league that has anywhere near the amount of fans that we have, and we can’t wait to play with our supporters behind us on Friday night,” Darragh Crowley said, speaking at the club’s weekly press conference.

“The last game against Cabinteely, was our second game as a group. A lot of new faces playing with each other. That’s not an excuse, but we’ve got 10 games behind us now, and with the fans behind us on Friday night, there’s no reason we can’t come away with the win.”

In terms of injuries, both Rob Slevin and Paul Hunt are sidelined for the Rebels. Steven Beattie has returned to training but a decision has yet to be made on whether or not he will be fit enough to be involved on Friday night.

Cabinteely have won three of their last five games and they are sitting in the playoff spots, as they currently occupy fifth place, although they are just one point ahead of Bray Wanderers.

Despite their good form, their last fixture before the mid-season break saw them lost to bottom of the table Wexford.

Wexford had lost all of their games before their meeting and goals from Kyle Robinson and Jack Doherty saw the side claim victory over the South-Dublin side in May.

Pat Devlin is eyeing a return to winning ways for his side— but manager is expecting a tough battle on Friday night.

“We’ve had a little break, but we’ve trained all along. Cork are one of the best sides I’ve seen this year,” he said, speaking to the club’s media team.

“Crowds coming back makes a big difference. But we will be up for it. It is fantastic to have the fans back.”

Cabinteely will be without Andy O’Brien and goalkeeper Adam Hayden for the trip to Cork with the pair sidelined due to injury.

The sides have met just once ever in the League. Cabinteely came out on top on that occasion earlier this season with a 1-0 win over the Rebels at Stradbrook.

They also met in the FAI Cup in 2019 with Cork City coming out on top after penalties.

A win for Cabo could move them into third place in the First Division.

Cork City and Cabinteely are two of the lowest scoring teams in the League with just ten goals each so far this season.