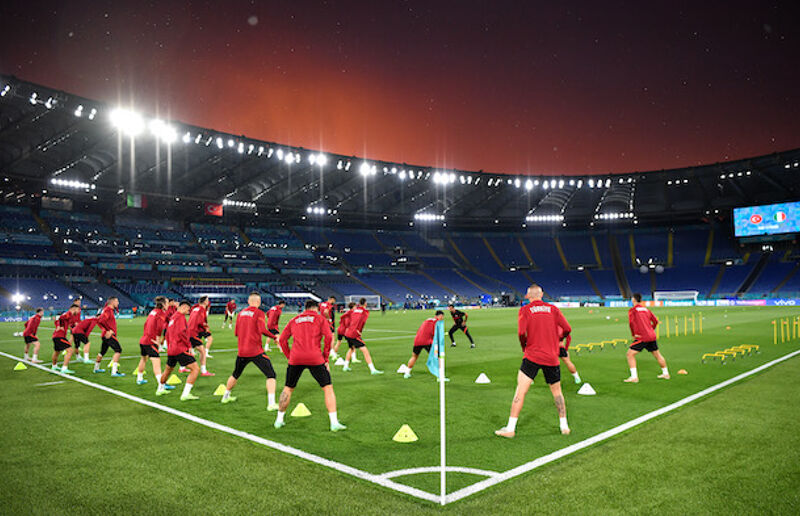 Turkey train at the Stadia Olympic on the eve of Euro 2020 kick off Credit: Valerio Pennicino - UEFA via Getty Images

Senol Gunes’ squad has a solid mix of players plying their trade domestically in Turkey, and those playing in other European leagues such as Italy, England, France and Germany amongst others.

Besiktas, Galatasaray and Fenerbahçe all participated in a thrilling title race in the Turkish Super Lig, with Besiktas winning the title by virtue of a single goal after they finished level on points with Galatasaray. All of these sides are well represented in the squad while Trabzonspor and ?stanbul Ba?ak?ehir also have representatives in the squad.

Lille trio Yusuf Yazici, Burak Yilmaz and Zeki Çelik are also in after helping the club to their first Ligue 1 title since 2011. Ozan Kabak is also involved after helping Liverpool to a top four finish during his loan spell at Anfield, while Leicester stars Cengiz Under and Çaglar Söyüncü  also make the cut.

Turkey finished runners up to France in Group H of the Euro 2020 qualifiers, a group which also included Iceland, Albania, Moldova and Andorra. Iceland were the only side to go unbeaten against the Turks during qualifying, with group winners France also managing to secure a point against Turkey in Paris on matchday eight.

While the campaign was a success for Turkey overall, the standout result came in matchday three when goals from Kaan Ayhan and Cengiz Under helped Gunes’ side to a remarkable 2-0 victory against world champions France in Istanbul.

Burak Yilmaz: The 35-year-old striker showed that he can still do it at the top level by finishing as Lille’s top goal scorer as they secured their first league title since 2011 last month.

Coming into the tournament on the back of scoring 16 goals in 28 games will certainly make the Swiss, Welsh, and Italian defences take notice of the veteran as they prepare for Euro 2020.

Hakan Çalhano?lu: The 27-year-old attacking midfielder helped AC Milan to a second-place finish in Serie A this season. Çalhano?lu chipped in with ten assists and four goals at the San Siro while also contributing two assists and a goal as Turkey qualified for Euro 2020.

Zeki Çelik: Like Yilmaz, the full-back was influential in helping Lille to domestic success this season. Not only did the 24-year-old play apart in his side finishing with the best defence in the league, but Çelik also scored and assisted three times during the campaign.

Turkey will play their first group game in Rome against Italy, before taking on Wales and Switzerland in Baku, Azerbaijan where they will also be based during the tournament.

Senol Gunes is in his second spell as manager of  the Turkey National Team. Gunes also managed the Crescent-Stars between 2000 and 2004.

During that spell in charge, he helped Turkey to a third place finish at the 2002 World Cup before being sacked a couple of years later as Turkey failed to qualify for Euro 2004 after losing to Latvia in a play-off.

Turkey are set to play at back-to-back European Championships for the first time since 2000 with the side missing out on EURO 2004 and 2012.

Turkey will be aiming to qualify for the knockout stages of a major international competition for the first time since Euro 2008, when Germany knocked them out at the semi-finals stage.

Turkey have won five of their last ten international fixtures by beating the likes of Netherlands, Norway, and Russia. They also drew four times during that period, while Hungary were the only side to beat Gunes’ side during those ten games.

First game: Turkey play Italy in their opening Group A fixture on Friday, 11 June in Rome.