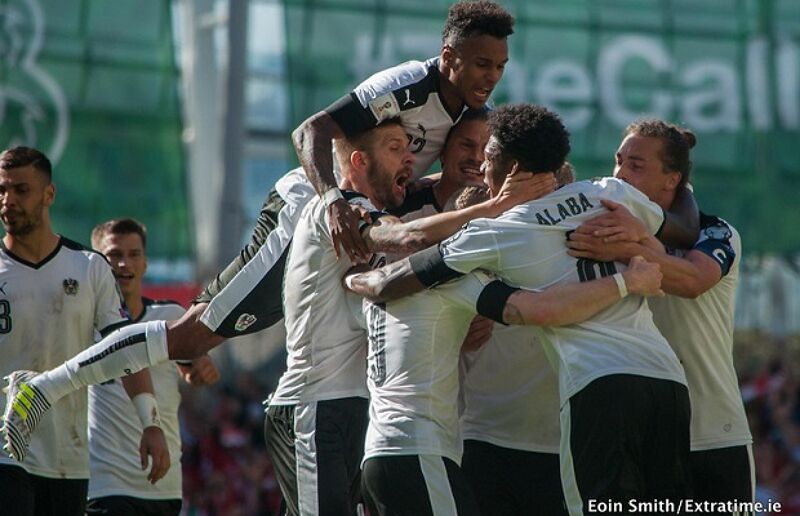 The vast majority of the 26-man Austrian squad play in the German Bundesliga, 20 players in total are spread across some of the big hitters in that league, Bayern Munich, Borussia Monchengladbach and Eintracht Frankfurt amongst others.

Close followers of the game in England may recognise the only UK based player in the squad, David Bachmann who is with Watford in the Championship, a player who incidentally only made his debut for his country in the recent 1-0 defeat to England on Wed June 2nd.

There are only two players representing the domestic league in Austria while the remaining two players in the squad are with clubs in the Italian and Swiss leagues.

HOW THEY GOT THERE

Austria was paired with five other teams in Group G of the qualification process, alongside   Israel, Latvia, North Macedonia, Poland and Slovenia.

Two teams qualified automatically from this group, pre-qualification favourites Poland topped the group as expected, only losing one match on their way to accumulating 25 points.

The latter did manage to eventually qualify for the tournament proper via the National League route and coincidentally have been paired with Austria again in this tournament, the two sides will meet in Bucharest on June 13th.

Austria had the upper hand on North Macedonia in both the home and away qualification fixtures, winning those matches on 4-1 and 2-1 score lines.

Austria had the best goals for record in Group G, scoring 19 goals in total, one better than Poland’s total of 18 goals, with their 6-0 thrashing of Latvia at home being the highest scoring match in that group.

David Alaba: David Alaba is Austria’s most celebrated player with 80 caps for his country and a chequered career with Bayern Munich, one of Europe’s most successful clubs.

He made his debut for his country as a 17-year-old back in 2009 and went on to play more than 400 games for the German club, amassing 10 Bundesliga titles as well two Champions League titles, the latter in 2013 and 2020.

Alaba is a very versatile player and can slot easily into midfield or in either of the full back positions and it is as a left back he will be best remembered by followers of the Irish Senior International team.

Playing as a number three Alaba effectively ended Ireland’s hopes of qualifying for the 2014 World Cup when he scored a late goal in the Ernest Happel Stadium in Vienna back in Sept 2013. That goal that gave Austria a 1-0 win and put an end to Ireland’s hopes of making the World Cup finals in Brazil

Marko Arnautovic: Arnautovic is a 32-year-old centre forward who has netted 26 goals for Austria in the 87 times he has represented his country.

He will be well known to followers of the Premiership in England having spent two years of his career with West Ham Utd before a €22.5m transfer to Chinese club Shanghai Port in July 2019.

He netted four of Austria’s 19 goals in the qualification group matches.

Marcel Sabitzer: The RB Leipzig midfielder, 27, has established himself as one of the finest all-round attackers in the German Bundesliga.

With some sensational strikes on the big stage in the Champions League and the knack for a good free-kick, he possesses just the kind of technical quality and flair to make a real impact on the tournament.

WHERE ARE THEY PLAYING AND STAYING

Austria have qualified for the European Championships twice before, in 2008 and 2016, but in both tournament’s they failed to get past the group stages.

Team manager Franco Foda is the first German to manage the Austrian national team. He was appointed to the position in Jan 2018 having previously managed Strum Graz in the German Bundesliga.

Star player David Alaba has the choice of three countries to represent, he was born in Vienna, capital of Austria, but he could also have played for Nigeria where his father George Alaba was born or the Philippines, the place of birth of his mother Gina Alaba.