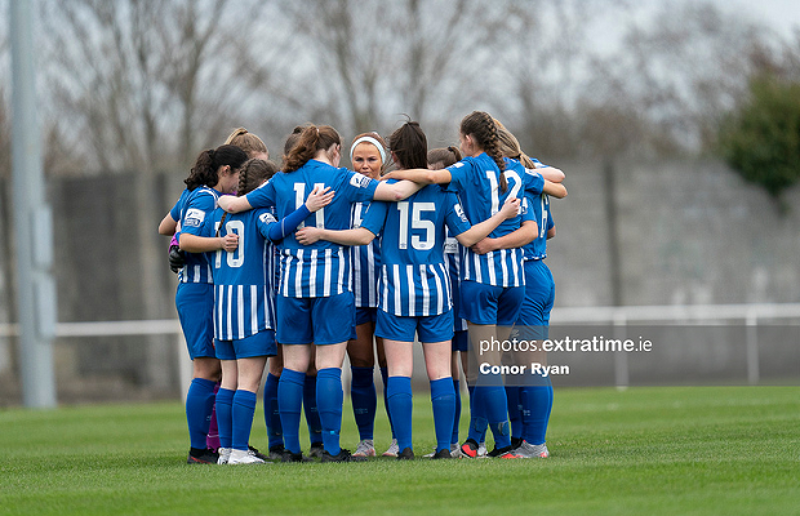 Treaty United huddle ahead of their WNL clash against Bohemians in March 2021. Credit: Conor Ryan (ETPhotos)

Treaty United will be looking to get back to winning ways when they host Bohemians at Jackman Park on Sunday (kick-of 2pm).

After a great win against Cork City two weeks ago, Niall Connolly’s side suffered a tough defeat to DLR Waves last weekend.

The Dublin side ran out 5-0 winners over Treaty at Jackman Park last Sunday, although Treaty had several chances to nab some goals of their own throughout the game.

With the mid-season break on its way a win on Sunday would be a great way for Niall Connolly’s side to end a tough opening part of the season— which included a 6-2 loss to Bohemians at the start of the season.

There’s some good news for the Limerick side as Esra Kangal, Aoife Cronin, Emma Costelloe and Clodagh Doherty return from injury.

Alannah Mitchell is still out with a hip injury while Alana Roddy is out for the season with an ACL injury.

Sean Byrne’s side claimed their second win of the season last week when they faced Athlone Town last Saturday afternoon.

It was a tough fought victory with Erica Burke putting Bohs in front with two goals in the first half after Atlhone’s Katelyn Keogh put the home side in front initially.

The sides ended up level after Roisin Molloy scored for Athlone in the second half but Chloe Darby nabbed the winning goal in the 66th minute to claim the three points for the Dublin side.

That win moved Bohemians up to fifth place in the WNL table ahead of Galway on goal difference.

Treaty United and Bohemians have met three times in the WNL with the Limerick side having the superior record with two wins.

Bohemians have two wins so far this season.

Treaty United have won one game this season.