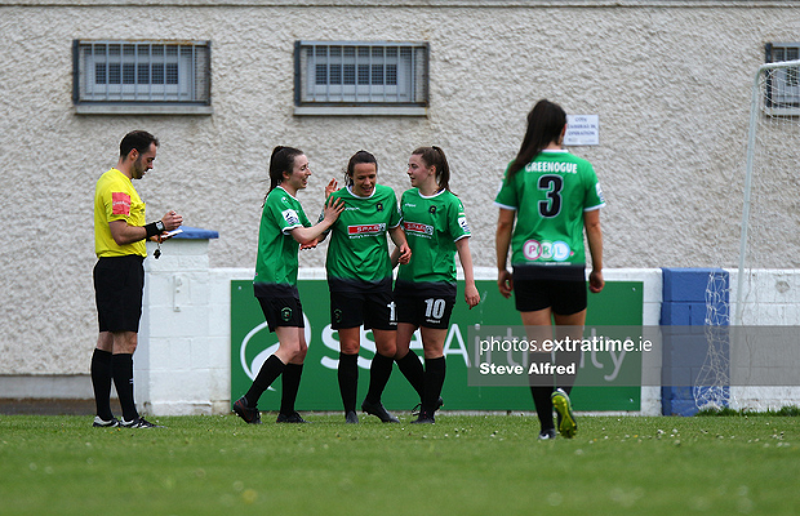 Aine O'Gorman is congratulated by teammates after scoring against Treaty United on Sunday, 2 May. Credit: Steve Alfred (ETPhotos)

Peamount United will be looking to keep their winning run going when they host Wexford Youths at PRL Park on Saturday (kick-off 6pm).

James O’Callaghan’s side have won all eight of their WNL games so far this season including their previous meeting with Wexford Youths at the start of the season.

With Shelbourne and Wexford drawing their game last weekend, Peas extended their lead at the top of the WNL table to five points having beaten Galway 4-0 last Saturday.

Claire Walsh opened the scoring for Peas last weekend in the sixth minute with her first goal of the season.

Eleanor Ryan-Doyle added two goals, one in each half, the striker now has ten goals for the season and last weekend was her third game in a row that she has scored a brace.

Della Doherty scored her first ever senior WNL goal in the 38th minute, another positive for O’Callaghan’s side.

Depending on how Shelbourne do against Athlone Town on Saturday, Peamount United could go eight points clear at the top of the table.

Wexford are in third place in the League and a win for Peas could go ten points ahead of them.

Wexford Youths have been in great form all season with the only blot on their 2021 campaign being a loss on the first day of the season against their opponents for this weekend.

That loss on the opening day of the season was a tough break for Wexford with Kylie Murphy failing to convert from the penalty spot in the 84th minute before Eleanor Ryan-Doyle netted three minutes later to claim the victory.

If Youths want to stay in the 2021 title race a draw is a minimum requirement for Wexford this weekend.

The only absentee for Youths is Aoife Slattery who is still recovering from a long term leg injury.

Peamount United are aiming for their 16th WNL win in a row this weekend.

Eleanor Ryan-Doyle netted a brace for the third game in a row last weekend, she now has ten goals for the season so far.