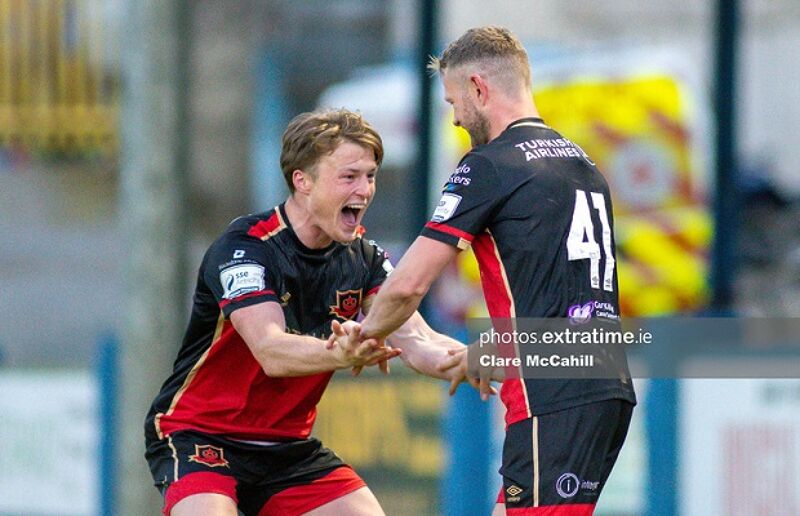 Both sides were reduced to ten men with Luke Heeney the first to see red. David Webster was next to go after two yellows and from the resulting free kick, Drogheda’s Dane Massey fired in off the crossbar to win the game deep into added time.

Tim Clancy’s side began the game one spot and one point above their hosts for the evening as both sides made changes to their starting line-ups.

One for the hosts while there were two different faces in the away side compared to their last outing.

The visitors created the first decent opening less than ten minutes in and were within a touch of the opener, but Ronan Murrays corner flashed across the goal.

The Ballybofey side fashioned a chance of their own after some good build-up play a few minutes later but the final ball from Karl O’Sullivan was beyond the reach of Stephen Doherty.

Just shy of the twentieth minute and Drogheda once more witnessed a cross flash across the face of goal. Harps countered following a clearance but Adam Foley could only find the gloves of the grateful David Odumosu from close range.

Both sides wasted opportunities in the minutes in and around the half hour with Barry McNamee and Darragh Markey both blazing shots high and wide.

The best opening of the match fell to the visitors eight minutes before half time.

Following a set-piece and initial clearance, the ball fell at the feet of Mark Doyle who directed a shot towards goal with Mark McGinley getting down well to save as the sides went into the break with the deadlock unbroken.

McGinley was once more thrust into the thick of the action moments into the second half, pulling off two fine saves.

First, denying Ronan Murray who attempted to beat the shot stopper with a cutely taken free kick from the edge of the area. McGinley then thwarted the visitors next chance, diverting a point blank header from Doyle over the bar.

The game went quiet in terms of clear cut chances as the game went beyond the hour mark but the sixty seventh minute introduction of Conor Barry for Harps almost reaped instant reward as the midfielder fired inches wide with one of his first touches.

Harps went close once more a few minutes later via the right boot of David Webster, his well struck half-volley fizzing over the bar.

With ten minutes to go, Harps had claims for a penalty as Tunde Owolabi was brought down under pressure from James Brown. The striker was adamant but the referee was unmoved.

Owolabi was involved once more as the game entered stoppage time. Bearing down on goal, Luke Heeney hacked down the striker roughly 30 yards from goal and without hesitation from the referee, he was given his marching orders.

In the dying embers of the game, the hosts were reduced to ten men courtesy of a second yellow for Webster after fouling Chris Lyons on the edge of the area as he looked to latch onto a pass from James Brown.

With the last kick of the game and two men standing over the free, Dane Massey with his left foot, thundered home the free kick in off the underside of the bar to spark wild scenes on the away bench.

The late winner moved Drogheda up to 19 points for the season, remaining in fourth spot while Harps sit a place below on 15 points.