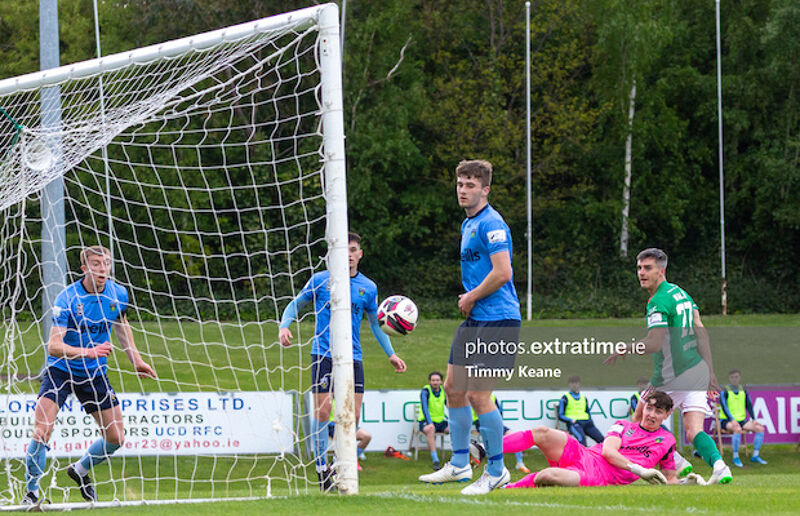 Jack Walsh of Cork City watches on as his header comes back off the post Credit: Timmy Keane (ETPhotos)

First Division leaders UCD were held to a scoreless draw by Cork City at the UCD Bowl on Friday evening.

Andy Myler’s side were unable to create enough opportunities to secure the three points, while City moved to within four points of Cabinteely who find themselves in fifth – the final playoff position.

The Students came into the game knowing that recent history was against them in regard to their fortunes against Cork City.

Since 2008, UCD had only won four times against their Leeside opponents – with their last victory coming in April 2019 following a late Gary O’Neill brace.

But in terms of this season, City have struggled for the most part – prior to kick-off at least – winning just two of their opening seven league games.

And those two wins came at home against Wexford and Cobh Ramblers, with the most recent of which seeing Colin Healy’s side rack up a 5-0 win over the Slaneysiders who parted ways with their manager shortly after that defeat at Turner’s Cross.

Colin Healy opted to make no changes from that win over Wexford, and Gearoid Morrissey made a welcome return to the squad to take up a position on the bench.

UCD on the other hand had to make do without the services of regular first-choice goalkeeper Lorcan Healy, with Carl Williams making his first start of the season – and Liam Kerrigan also missed out.

After an industrial start to proceedings, City almost took the lead in the 15th minute, but were denied by a last-ditch block from Harvey O’Brien.

Gordon Walker’s cross found the head of Jack Walsh first, with his header crashing off the bar as he beat Williams to the ball in the air.

The ball then fell into the path of Darragh Crowley who saw his effort blocked on the line by O’Brien as the Students survived an early scare.

UCD reacted well to that early scare – and went close themselves shortly after, but Paul Doyle’s header at the back post was never troubling the experienced Mark McNulty.

Colm Whelan then went close for the hosts just before the half-hour mark, but he dragged his shot wide after he went on a dancing run through the City defence.

The Kilkenny native went close again for the hosts minutes later, but he shot over the bar with a curling effort after Paul Doyle’s drag-back.

But on the stroke of half-time, Cian Bargary forced an excellent save from Williams in the UCD goal, tipping over the bar after the wing-back’s stinging strike on goal to keep the scores level at the break.

The lively Whelan then went close himself minutes into the second-half, but McNulty was on hand to push his long-range strike over the bar.

But City came back with an opening of their own in the 52nd minute, with Williams forced into another smart save – this time from Cian Murphy.

Murphy pounced on a loose ball for the visitors after a Bargary corner – but the Tipperary native in the UCD goal was equal to City’s opening from a set-piece.

UCD’s netminder had to be alert again from a City free-kick in the 70th minute, as he denied Jonas Hakkinen at the back-post.

The impressive Bargary then went close from his own free-kick with just over five minutes to play, but it was deflected over the bar as the scores remained deadlocked.

And that was how it finished as City earned a hard-fought point in the capital, while UCD were denied the opportunity to extend their lead at the top of the table to three points.