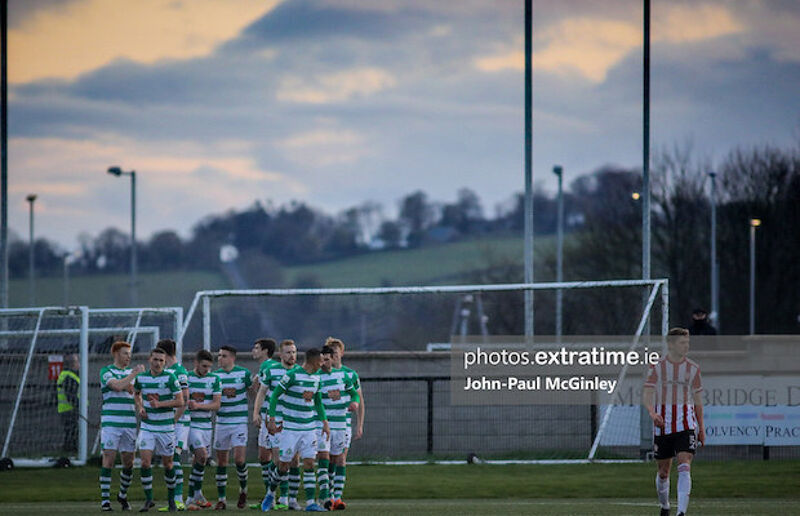 This Hoops side has been much lauded for their record unbeaten run in the league – which now stands at 32 matches – and their late goals in games that have been crucial to changes results, but you’d have imagine that Stephen Bradley would be thankful for a couple of early goals and a clean sheet for his team tomorrow when Derry City come to Tallaght (kick-off 6pm).

Last time out in Tallaght Rovers did just that earning their first clean sheet at home of the season in a 3-0 win over Waterford. Last Saturday away to St. Patrick’s Athletic Danny Mandroiu matched what he did in Drogheda by scoring an injury time winner for the Hoops.

“It's always nice to score a late winner,” said the Hoops Head Coach speaking to shamrockrovers.ie. “I think we've done it on quite a number of occasions this year, and the emotion and the feeling and the celebration has always been the same, last week was no different. Last minute winners are special.

Rovers fell behind to an early Chris Forrester goal before Graham Burke quietened the comments that were coming his way from the Camac with an equaliser before the break.

“I felt the goal against us actually woke us up a bit and got us playing,” said Bradley. “We missed two chances before Graham scored, then thankfully Graham went and scored just before half time but it was definitely coming.”

Mandroiu pounced on an error from Lee Desmond to get the winner in the 92nd minute.

"You play to the final whistle and when you have that mindset and that attitude you always have a chance of winning games.

“It shows how we play, how we wear opposition teams down, how fit the group are, it speaks volumes for the group, their character and their qualities.

“He's been fantastic,” said Bradley about Mandroiu. “His attitude has been first class. He's come in with a really open mindset of wanting to work and wanting to learn and his performances have been very, very good. Danny showed all of his qualities in that goal.

It was a Declan Devine Derry City team that Rovers last faced – with the Hoops winning 2-0 in the Brandywell last month – but now Ruaidhri Higgins is the man in charge.

"I expect Derry to be competitive and they'll come to Tallaght tomorrow with no fear and looking to take us on. I’m sure they'll relish coming to Tallaght and look forward to it, but every team does. We've got to respect that and be ready to match whatever they bring and then impose our game on them as quick as possible, that's what we'll try and do.

Ruaidhri Higgins takes his team to Tallaght on Saturday evening to face what he calls "the best side in the country". The Candystripes have earned seven points from Higgins’ first four games in the dugout.

"It's a very difficult task but we have to go there and look to be positive" said the City manager speaking to his club’s media team.

"I feel we have been playing well without always getting what we deserve so we have to stick at it.

"Obviously we know how much quality Rovers have and that includes some fantastic options in the final third of the pitch. We have to find a way to combat that threat and create chances for ourselves and that's what we'll look to do."

Having suffered their first every league defeat to Finn Harps at the Brandywell, City drew at home to Longford Town with James Akintunde rescuing a point with his injury equaliser.

Higgins can call on almost a full squad for this fixture.

"The boys have all trained well this week and I have a full panel to choose from, although we'll give Jack Malone a fitness test on Friday," confirmed Higgins.

It is four years since Derry City last beat Shamrock Rovers – that was a 2-0 win in the Tallaght in August 2017 thanks to goals from Aaron McEneff and Barry McNamee.

Rovers’ last league loss was a 3-2 defeat to Dundalk in Oriel Park back in September 2019. They haven’t lost a domestic match in Tallaght Stadium since a 1-0 loss to Dundalk in June 2019.

Jim Magilton: 'Does this shine a favourable light on the club? Absolutely not.' https://t.co/9oM793vJ3X pic.twitter.com/jZxIRkyCL0