Ian Morris: 'You've got to capitalise when other teams aren't going well and keep that momentum going' 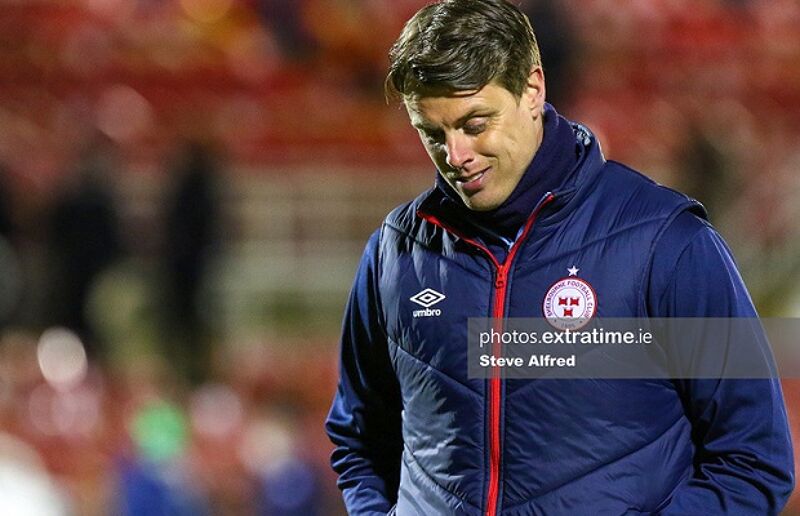 Shelbourne boss Ian Morris praised his players positive start to the season as the Reds look to pull away at the top of the First Division table from their promotion rivals.

Morris’ charges have won four and drawn three of their opening seven games of the season – and are level on points with table toppers UCD, only behind on goal difference.

Their most recent game saw them earn a comprehensive 1-0 win over Athlone Town at Tolka Park – and their manager was pleased with his side’s best ninety-minute performance this year.

“The result is king, but the performance was something that we have been focusing on,” he said after the game.

“We needed to move the ball better and I thought tonight that we did. The pitch is in great nick and when it has a bit of zip on it, we can move it well and quickly.

“But the three points is important. I thought it was probably the strongest performance of the season over ninety minutes.

“We moved the ball well, got a clean sheet and the three points – you can’t ask for much more than that.”

This is of course Shelbourne’s first year back in the second-tier since 2019 – and Morris believes that the First Division will be a harder league to get promoted from this time round.

“It’s definitely stronger than it was (in 2019),” he said. “There’s a couple of teams who had stuttering starts that are just going to get better.

“You look at Bray, Galway and Cork and they’re going to get stronger as things go on.

“You’ve got to capitalise when other teams aren’t going well and keep that momentum going yourself by keeping that standard and tempo going.

“It’s important that we’ve done that early on this season and well look to keep that going.”

Friday also saw the return of Shels captain Luke Byrne to the fold after injury and suspension – but the Reds are likely to be without Denzil Fernandes for the time being after the former Cobh winger picked up a broken nose in training.

“It’s Luke’s first game this year and he has worked really hard behind the scenes to get back.

“He got his reward coming in to get a clean sheet and captaining the team to a win.”

He added: “Denzil took a nasty one and broke his nose in training, so we need to be careful with that one in terms of coming back – we need to monitor it.

“(Denzil and Gerardo Bruna) are the two that we’re concerned about but everyone else is OK.”