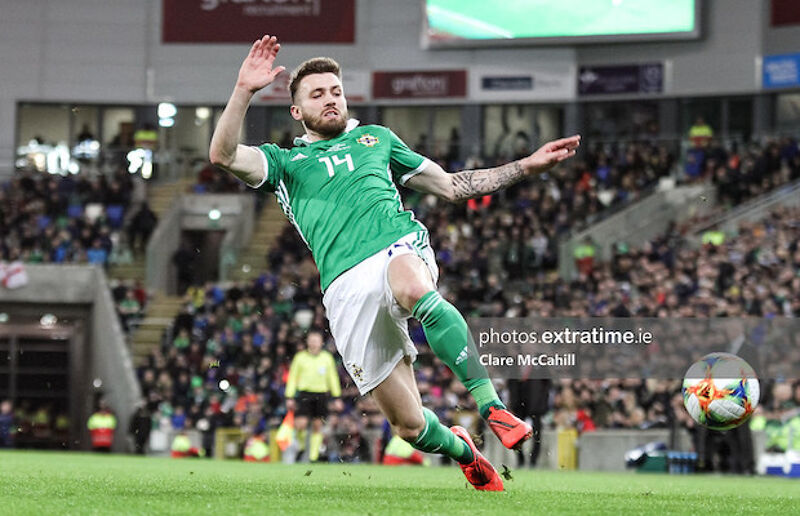 Stuart Dallas of Northern Ireland during their 2-1 win over Belarus in 2019 Credit: Clare McCahill (ETPhotos)

Northern Ireland and former Crusaders midfielder Stuart Dallas has played in six different areas of the pitch for Marcelo Bielsa’s exciting Leeds United side in 2020/21. Frontrunner for Leeds’ Player of the Season, he has been the reliable and flexible nucleus of a team fancied to finish the campaign in the top half.

Is Dallas in Contention for Other Awards?

Leeds have exceeded expectations in the Premier League more than just about any team this year. Together with top four-chasing West Ham and a Leicester side at 2.4 to end the season with silverware according to FA Cup odds, it's looking positive.

Even though Leeds would need a perfect run-in to secure European football, the hierarchy at Elland Road preached the importance of simply staying in the Premier League prior to the season. They have achieved that with time to spare.

Although Leeds wouldn’t have been among the football tips for the European spots when the season started, the style of football under Bielsa has wowed neutrals everywhere. Leeds built a reputation for relentless pressing and attacking in numbers early on in the campaign.

But in the first half of the season, they lost matches 4-3, 4-1 (twice) and were drubbed 6-2 by Manchester United at Old Trafford.

The second half of the season was much more promising. Prompted in part by Bielsa’s decision to move Dallas into midfield, the Whites have looked much harder to break down. Indeed, of the teams that scored four goals or more against Leeds in that topsy-turvy first half of the season, none won the reverse fixture in the second half.

A hard-fought draw with Manchester United at Elland Road in April was part of a six-game unbeaten streak that also included draws with Chelsea and Liverpool.

The 16-year wait is over

Bielsa, a coach known for his in-depth analysis and obsession with game tape, is famously rigid in asking players to adapt to his high-intensity football. That was the mindset that took a Leeds squad that finished 13th in the Championship in 2018 to a playoffs spot in 2019 and, eventually, the Championship title in 2020.

Dallas was a part of that 13th-placed squad, and under Bielsa, he has flourished from a model player to an indispensable cog in the Premier League Leeds machine. Spending time at left-back, right-back, defensive midfield, centre midfield, and both wings this season, Dallas allows Bielsa to keep his preferred smaller squad size. After all, Dallas is functionally three or four Premier League players in one body.

Aside from being one of Bielsa’s field generals alongside Kalvin Phillips and a leader in the locker room, Dallas has also appeared when Leeds needed him most this season. In one of the best individual performances of the Premier League campaign, the Northern Irishman made his impact on Manchester City by scoring twice to down the champions-elect at the Etihad.

With seven goals, two assists, and nine clean sheets to his name, there’s no doubt that Dallas, in his age-30 season, is playing some of the best football of his career. The question is no longer if he deserves to be in the Premier League Team of the Season – the question is which position he would qualify under.