Gary Shaw: 'I like it up here. I’ve scored a couple of important goals' 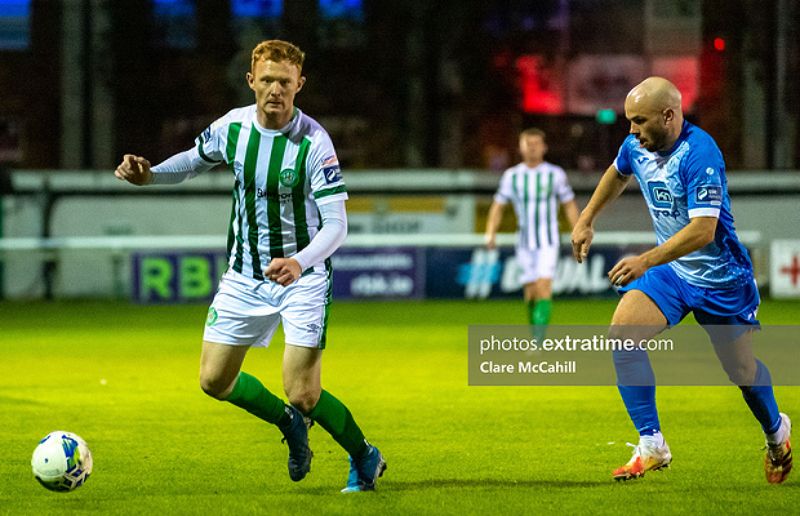 Bray Wanderers earned their first win of the First Division campaign when they snatched a late goal against Galway United to run out 2-1 winners on Friday night.

The victory comes at a great time for Wanderers with the side winless in their first six League games, despite only losing the once.

Gary Shaw was the man to net the winning goal, having come off the bench in the second half he headed the ball into the net from a Brandon Kavanagh corner in injury time to win the game for the Seagulls.

“It was a huge relief,” Shaw said, speaking to extratime.com after last night’s game

“We’ve felt we’ve been playing well, we’re just not getting that bit of luck.

“We didn’t have someone up there to put it away, we’ve been chopping and changing around.

“Brandon [Kavanagh] has been playing as a false nine and we’ve been putting wingers up top, we’ve just had a real unfortunate run with injuries.

“I got injured against Shelbourne and I’ve been coming back bit by bit, Gary [Cronin’s] been brilliant and patient with me and it was good to get a good run out tonight.

“I like it up here, I’ve scored a couple of important goals.

“Tony Cousins always said to me just get between the posts and you’ll have a chance, I’m glad I was there and I’m glad I put it away, it’s a great feeling.”

Shaw picked up an injury during the Seagulls second game of the season, a 3-3 draw with Shelbourne, and the striker has been slowly coming back into the mix with appearances off the bench in recent weeks against Cobh Ramblers and Cork City.

“I’ve only played about 60 minutes of football this season so it’s been a very frustrating start for me, getting injured in the second game,” Shaw explained.

“Just out of the blue, I felt really good in pre-season and I was scoring goals and I was really looking forward to it.

“It was an unfortunate thing to happen and just with a hamstring injury you have to be so careful with it, especially me, I’ve had a couple of niggles in the past so I didn’t want to do any damage too soon because you can ruin your season.

“Gary was patient with me, he put me on said could I go for half an hour 40 minutes and that was fine with me, look like I said, be in the mix when the ball comes in and Brandon put a great ball in and I was there.”

Bray Wanderer’s attention now turns to their next opponents, Cabinteely and Wexford, and Shaw believes the Seagulls could be coming into form at the right time with several players coming back into the mix.

“We’re slowly getting bodies back. We’re missing five or six starters. We’ve Ryan Graydon coming back from suspension which has been a massive loss for us, he’s a huge part of the team.

“We have Darren Craven, Steven Kinsella coming back so serious firepower coming back at the right time, we’ve got that monkey off our back now, got the win under the belt.

“We just need to kick on now, two very winnable games coming up in Cabo and Wexford and that sees us out the series then.

“If we can finish that with three wins, then brilliant, we can go into the next series of games with a full squad and a real desire to go and do well.”