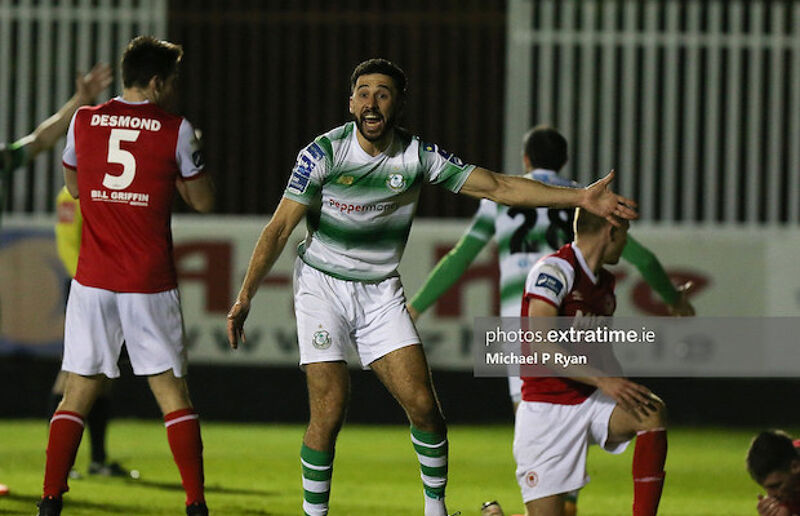 The top two meet in the Dublin Derby on Saturday evening (kick off 6pm) as St. Patrick’s Athletic entertain league leaders Shamrock Rovers at Richmond Park. Both teams are unbeaten in the league so far this season.

This year Pats have picked up 21 points from the 27 on offer from the first full round of fixtures. The Athletic come into Saturday’s game two points adrift of their opponents.

Saints boss Stephen O’Donnell speaking about the game said “we know going in when you play Shamrock Rovers, you are going to have to be at your best or somewhere very close to your best to get something from the game.”

Cian Kelly remains sidelined with a foot injury and St. Pat’s have no further injury concerns to report.

“They are all big games in the league. Obviously, Rovers is a Dublin Derby and they're classed as rivals so it's a big game. The players will all be up for it on both sides and it's a top of the table clash. We probably haven't had one in a while so we are all buzzing for it and we can't wait to get going.

“We've got to enjoy it and go and embrace it and take the game on its merits and we will be at it Saturday. We are looking forward to it, it's a big game, it's a Dublin derby so we will be right for it."

The Saints were the one team that the Hoops failed to beat in league action last season.

Lee Desmond speaking ahead of the game said: “We are unbeaten against them since Stephen O'Donnell has come in, there has been four draws in the last four games so they know they will come up against a good defensive side, but we will create chances up the other end too and we are looking forward to the game."

Defending champions and league leaders, Shamrock Rovers head to Richmond Park unbeaten having made history against Waterford last time out when they stretched their unbeaten league run to 31 games.

“I’m really, really proud of the players and how they went about the game on Monday,” said Bradley about the win over Waterford earlier this week that got them the all-time record. “It was off the back of a tough run of games, but I thought they were excellent, and they obviously go and get their rewards with the three goals, clean sheet and they break the record. I’m incredibly proud of the players, fantastic achievement.

“We knew before the game we had a chance to create a bit of history, we went and did that thankfully, but now it's about moving on and that's what you have to do. It counts for nothing against St. Pat's, a really difficult game.”

The Hoops earned their fourth clean sheet of the season and it is back-to-back shutouts for Rovers. “Everything we do is based on clean sheets. You have clean sheets and you have a great chance of winning football games.

"That's everything we do and like you said, it's great to have back-to-back clean sheets and hopefully we can keep it going on Saturday.”

The Hoops have difficulties up the left side of the pitch with Sean Kavanagh out injured, while Aaron Greene and Neil Farrugia limped off against Waterford last week and are both doubtful for Saturday evening with fears that Farrugia has aggravated his hamstring on his return last week after being out for several months.

Liam Scales is likely to continue to be deployed as left wing back.

“If you look at the games (against Pat’s) and not just the outcome, there’s been chances in all of the games. Sometimes it’s a great save or the width of a post from being a couple of goals in the game.

"I think both teams will approve the game like they always have and it will be a difficult game, it will be a tight game.”

The sides drew on the opening night of the season when it looked like a late Roberto Lopes OG was going to earn the Saints all three points before Aaron Greene grabbed an even later goal.

The last four league meetings between the teams have been draws.

Alan Mannus is set to play his 75th consecutive league game on Saturday.

The goalkeeper claimed his 75th league clean sheet for Rovers last Monday (from 143 games) and this weekend is set to play his 75th consecutive league game for the Hoops.https://t.co/MbTNBesWtb pic.twitter.com/6TN1eLMgPU