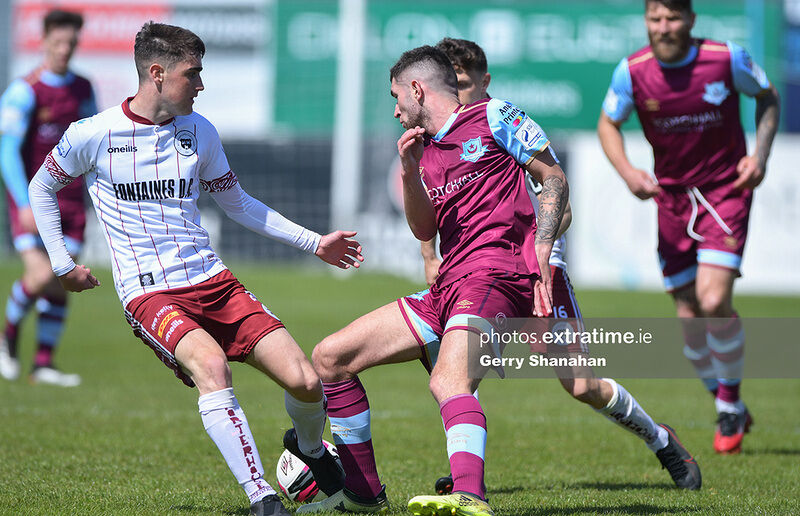 David Wilson reports from Head in the Game Park.

A piece of magic from mercurial talent Dawson Devoy looked to be the difference between Drogheda United and Bohemians at a cold and wet Head in the Game Park before substitute James Clarke capitalised on a poor Devoy clearance in the 93rd minute to earn the Drogs a share of the spoils.

Bohemians went into today’s game off the back of a poor home defeat to Derry City and were looking to further their European aspirations in Drogheda today.

Tim Clancy and his Drogheda side can be relatively pleased with their start to the season, occupying 5th position before today’s game.

The opening half largely followed the pattern of Bohs keeping the ball and struggling to penetrate dangerous areas, whereas Drogheda sat in and tried to win the ball back in the middle third before deploying a quick counterattack.

It took only five minutes for the home ‘keeper to be called into action. David Odumosu parried well after Anto Breslin latched onto a breaking ball 19 yards out.

Drogheda allowed Bohs to keep the ball at the back but not let them receive it in little pockets of space in dangerous areas.  Gary Deegan latched onto a misplaced pass and set Chris Lyons away who shot early but dragged his effort well wide of the target in United’s only real chance of the opening half in the 25th minute.

Devoy was brightest for Keith Long’s side trying to get on the ball in deeper areas and conduct attacks. Just before the half hour mark, Devoy found Ross Tierney excellently before he tried to tee up Liam Burt, but the Scot’s cross was blocked by Dane Massey.

Head in the Game Park is a tight pitch where both benches are separated by the fourth official. It felt like a cauldron as both teams left in some heavy challenges.

In the 32nd minute Odumosu collided with Tierney in the box as the Bohs bench went into raptures claiming a penalty but the referee waved away protests.

Seconds before the halftime whistle Bohs broke in a 3v2, Devoy tried to slip in Tierney but James Brown excellently tackled to prevent a dangerous looking attack.

Gary Deegan, Mark Doyle, Georgie Kelly and Ross Tierney all went into referee John McLoughlin’s book in the first half.

The first half lacked any real attacking quality as both teams struggled with the gusting winds.

In the 50th minute James Finnerty powered through the midfield and found Burt. The winger played the ball wide to Tierney who then found the overlapping Breslin who crossed from the by-line but picked out nobody. It was probably the best move of the game so far.

Deegan somehow failed to earn a second yellow card for a lunge on Burt much to the frustration of the away bench in the 55th minute.

The best bit of quality came on the hour mark. Devoy was once again at the heart of things conducting the Bohs midfield orchestra. The youngster dinked a wonderful ball over the head of Massey who appeared to stop right, into the path of Burt who looped his effort over the on-rushing Odumosu into the far corner to give Bohs the lead.

Promise Omochere and Keith Ward were introduced, as Breslin reverted to left-back as the away side continued to search for a second goal.

With just under 20 minutes left Tim Clancy was up in arms as Chris Lyons appeared to have been taken down in the box. From the press box it looked like a great Finnerty tackle.

Drogheda blowed and blowed but failed to create any clear-cut opportunities. Bohs continued to look dangerous on the counter but chances were few and far between.

In the 93rd minute an excellent Brown corner was not cleared by Devoy, as Clarke reacted quickest ro head beyond James Talbot earning what could be a crucial point for United. Bohs will be kicking themselves once more after failing to hold on for the win.