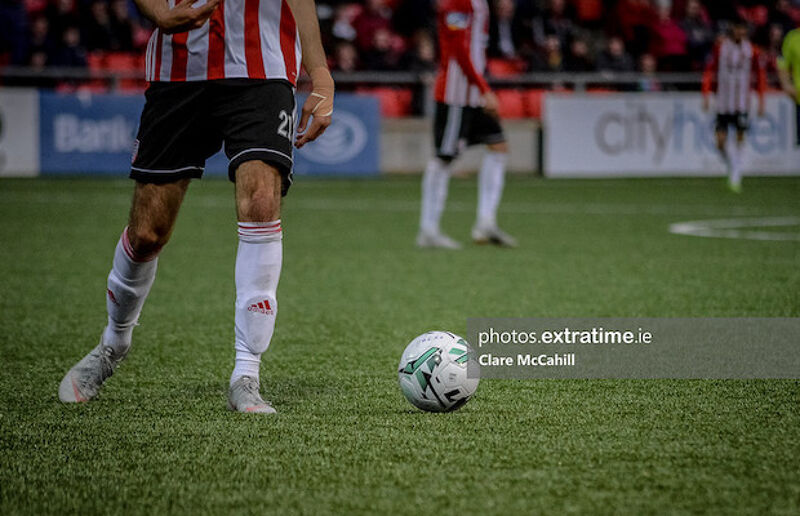 Airing as it did last Monday night, 24 hours into the storm around the proposal of a European Super League, Different League: the Derry City Story was as welcome to League of Ireland supporting TV viewers as a smooth creamy pint in Emyvale after an away game at the Brandywell.

Using a combination of interviews and archive footage, the documentary followed the story of the cityside of the Foyle and its football club from the early years of the Troubles through to a visit by Sven Goran Erikksen’s Benfica for a European Cup fixture in 1989. Numerous Derry related songs helped to provide an atmospheric soundtrack.

During the introductory survey of events the narrator reminded the viewer that the story of these years was an example of how ‘every now and again football can change the world’. Amen to that. Amen also to the fact that a healthy scepticism about making overblown claims was maintained throughout the programme and we were left in no doubt that the documentary makers and the narrator had their tongues firmly planted in their candystriped cheeks. Indeed, it must be said that the narration overall was one of the highlights and struck the perfect note for the story, even if Judith Roddy’s gentle, good-humoured style suggests that she is unlikely to be asked to be act as a steward along the dog track any time soon.

Whether he was discussing anti-Catholic discrimination and the ‘communal wound’ of Bloody Sunday, the importance of their team’s foreign imports to Derry people’s sense of themselves, or the ‘civil war’ between Jim McLaughlin and Noel King, the former PBP MLA was unendingly insightful.

He also looked remarkably sprightly for a fella who has spent large chunks of the last 78 years standing in the cold, supporting local football.

Issues relating to the political situation in Derry were dealt with in a frank but sensitive manner. These issues could broadly be grouped under the headings of identity and security. McCann spoke of the fact that since most Derry people were nationalists who longed to be part of the south, the fact the local team were admitted to and achieved success in the League of Ireland held particular importance.

Another supporter ascribed the popularity of mixed-race South African striker Owen da Gama do the fact that Derry’s nationalists identified with the anti-Apartheid struggle.

At the remove of 30+ years there’s no doubt that the security situation added numerous items of interest to the documentary. Archive footage showed Noel King being asked about his security concerns by local TV and even older footage showed Tony O’Doherty being arrested in the 1970s.

The famous anecdote about Martin McGuinness removing a bomb on the morning of the Benfica match in 1989 was related with relish. Although we were never told who planted the bomb. Was it the Loyalist UDA, the Provisional IRA, or perhaps a militant faction of the GAA? This segment was particularly laden with nostalgia for those of us, north and south, who can remember the state censorship of the 1980s, as a Martin McGuinness’ interview was voiced by an actor.

Tony O’Doherty, who also managed Derry in the 90s, was one of the ‘gang-of-four’ - a group of professional players from the city who campaigned to get the club into the League of Ireland after it had been expelled from the Irish League’s competitions. Interviews with these four men, along with other local heroes such as Felix Healy and Ray McGuinness formed the backbone of the documentary. An interview with Liam Coyle was noticeable for its absence.

This list of names was a reminder of something that has been a feature of Derry City Football Club during its time in the League of Ireland: the conveyor belt of local talent. All interviewees noted the pride that locals felt in the team and echoed the archive footage of Jim McLaughlin describing how special it was for a football professional to be involved with their home town club.

In an excellent segment, Ray McGuinness offered some particularly worthwhile reflections on how this dynamic can sometimes become negative when a local player makes a mistake and has to live with being reminded of it for the rest of their lives.

The coverage of the hype in the city during the club’s early years in the LOI was excellent. As well as an in-depth treatment of the dispute between Jim McLaughlin and Noel King, there was also an excellent discussion of the impact of players like Nelson da Silva, Alec Kristic, and Owen da Gama.

One local woman named her son after da Gama, who also had a personal fan club. That said, it was noticeable that Derry started having greater success once they mixed local talent from Foyleside with experienced League of Ireland operators from the south. It might be suggested that this is something that the current regime on the Lone Moor Road ought to reflect upon.

In many ways the real heroes of Different League are the Derry fans. The ordinary people who turned out in their droves for a friendly with Shamrock Rovers in 1984, and joined the colourful carnivalesque hordes who packed grounds across the country once Derry entered the League of Ireland.

This aspect of the story was related through a discussion of one of the earliest away matches at Monaghan and the 1986 FAI Cup quarter-final versus Cork City at Flower Lodge. Given the snappy and fast-moving nature of the production and the running time of little over an hour, we can easily understand the decision to focus on these matches.

Although no doubt that other events such as the 1986 First Division Shield Final victory over Sligo, or the defeat in the 1988 FAI Cup final would have served just as well.

Many, many fans were interviewed but I particularly enjoyed the vignettes about the lads who watched games from ‘Skint Hill’ as the local graveyard overlooking the Brandywell was known, and the thousands of women who attended matches. It’s just a pity that no room could be found for the late Nell McCafferty’s description of how she stopped attending Derry’s away matches because of the Guinness induced flatulence of her fellow travellers.

It may seem churlish to criticise such an enjoyable tv show, but, in the best of LOI traditions, here come the moans: There was some loose use of terminology. Much of this wouldn’t usually matter, but it does in football on this island as the ‘Irish League’ means something quite distinct from the ‘League of Ireland’.

Particularly irksome was the use of the term ‘Irish Premier League’ when reference was being made to the League of Ireland Premier Division since the former term is still often used for the top level of the game in the six counties. Furthermore, the statement that ‘as the new team Derry had to start in the bottom division’ was also poorly worded and misleading.

In fact, this bottom division was only formed the season that Derry joined the league, and this was one of the reasons their application was successful. Lastly, the claim that the Derry City side of 1988-89 were the first team to win the treble in the Republic of Ireland is probably a canard that will never die.

However, Derry City are the only team to do the Treble since the League Cup replaced the old LOI Shield competition in 1973. That is a significant achievement, and to be fair to the film makers, explaining this particular distinction to a general audience without getting bogged down in the detail would have been challenging. Still, these are small clarifications for hard core LOI fans.

From a historical point of view, perhaps some information could have been included about how interest dropped in the team during the 1990s. Particularly, since this mirrored the earlier declines in the urban areas of the south such as Cork, Dublin, and Dundalk.

Did the political situation in Derry mean that local football supporters were more resistant to the charms of ITV’s ‘The Big Match Live’ than their confreres further south? Or was there simply a great deal of pent-up demand as a result of the years during which there was no senior football on Foyleside? Was the rise of Ulster’s Gaelic football championship a factor?

Also, it was noticeable that many of the local legends who were interviewed, including Jim McLaughlin in his declining years, had played international football for Northern Ireland. Did Derry’s entry to the LOI see allegiances shift to the Republic or did that come later?

A Republic of Ireland squad without representation from the Maiden City is unheard of these days. Perhaps these might be themes that local journalists and film makers could return to? That said, the discussion of whether or not the return of senior football to Derry led to an end to rioting, which featured differing views from Eamonn McCann and Eddie Mahon, was as fascinating as it was good humoured.

Indeed, it should be underlined that, on the whole, the documentary is quite simply excellent. Or, Different league is different class, if you prefer.

Those who feature on the credits deserve congratulations on a good job, well done; as do the ‘gang of four’ and the great people of the Brandywell, the Bogside, and the Creggan.