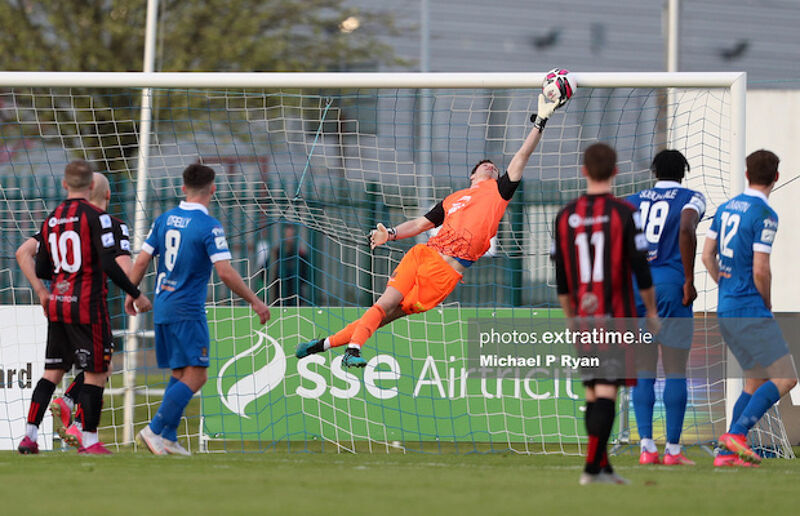 Paul Martin of Waterford saves from a free kick from Tyreke Wilson which rebounded from the cross bar and into the path of Rob Cornwall of Bohs to score Credit: Michael P Ryan (ETPhotos)

Our first article of this series opened with an appraisal of the attacking virtues of right backs Aidan Friel and James Brown. This weekend once again, the respective number twos were to the forefront of their teams' goal chances.

Brown earned a point for Drogheda United in the Ryan McBride Brandywell Stadium as he converted a cross from Dane Massey. For Athlone Town, it was a centre from Friel which allowed Kurtis Byrne to open the scoring against Bray Wanderers.

The Midlanders’ second goal, again courtesy of Byrne, was assisted by former Drogheda United attacker Adam Wixted – his third assist in his last three games. The only game he hasn’t grabbed an assist this  year was the first game of the season. In that match against UCD, he scored after an assist by Kurtis Byrne.

UCD themselves recorded a 4-1 win over Cabinteely this weekend – read their manager’s assessment of the match here. They’ve now scored nine goals in their last encounters against Cabo, with Colm Whelan nabbing a hat trick in consecutive seasons (he scored one against Wexford in 2020).

The Cabinteely response came courtesy of a Dean Casey free kick - his second set piece goal of the season after he notched the winner against Wexford on the opening match night.

Wexford lost 2-1 against Cobh Ramblers this weekend, St. Patrick’s Athletic loanee Kyle Robinson netting his first of the season following a Jack Doherty corner kick. His parent club themselves scored from a corner kick in their 1-1 draw at Oriel Park.

Robbie Benson’s cross was headed to the net by Sam Bone for the Westmeath man’s fourth corner kick assist of the past two seasons – his eighth goal contribution in the last 15 goals Pat’s have scored (two goals, six assists).

Bone’s last Premier Division goal came at the Ryan McBride Brandywell Stadium against Derry City. Similar to Bone on Saturday night, the Candystripes themselves scored from a corner kick the previous night. Will Patching played a short one-two before his cross was headed to the net by Ronan Boyce meaning the on loan Dundalk FC player has now an assist for both of Derry’s goals this season.

Another deadball specialist to spend time at Oriel Park, Georgie Poynton, recorded his fifth set piece assist since 2020 as former Derry City defender Ally Gilchrist found the net from his corner kick. Shane Farrell and a Yoyo Mahdy penalty were the other scorers for Ian Morris’s side, with a Dylan McGlade peno the sole Cork City response.

McGlade’s last goal for the Leesiders was a free kick in a 2-1 defeat away to Sligo in 2020 - Junior scoring the opener for The Bit O’Red in The Showgrounds on that occasion and he opened his Dundalk account on Saturday at Oriel Park.

Ex Blues’ full back Tyreke Wilson providing the assist for Rob Cornwall as his free kick was saved and Cornwall converted the rebound. Incidentally, while playing for Waterford last season, Wilson scored directly from a free kick against Bohemians.

While Wilson was responsible for goals both for and against the Dalymount Park outfit across two seasons, it was an ex-Bohs defender who accomplished the same feat in the one game this weekend at Tallaght Stadium. Roberto Lopes conceded a penalty to allow Dylan Grimes open the scoring for Longford Town before being fouled himself in the penalty area with Aaron Dobbs involved in both penalties.

While Gannon scored once against Longford Town this weekend, it was a full back who scored twice against Daire Doyle’s outfit last season who was responsible this weekend for a goal against his former outfit. Ex-Galway Utd defender Marc Ludden’s cross set up Ed McCarthy for Treaty United’s goal.

The Galway equaliser came courtesy of Wilson Waweru, who also scored against Longford Town last season and remains the only player to score in the league for The Tribesmen this year.

Andy Myler: ‘If we have any aspirations of doing anything serious in the division this season, we're going to have to play a bit better’ https://t.co/0aDzrNSr3G pic.twitter.com/3k7c8zEfd4