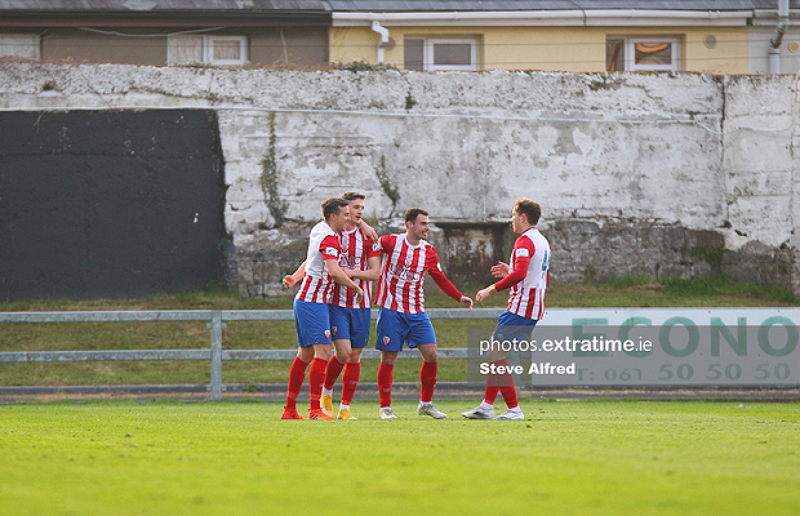 League of Ireland newcomers Treaty United continued their unbeaten start to the season on Friday night with a 1-1 draw with Galway United at Eamonn Deacy Park.

Another solid performance from the Limerick side saw Edward McCarthy open the scoring in Galway, with the visitors holding on to that lead deep into injury time.

Tommy Barrett’s side will have been disappointed not to hold out for the victory when, in the 93rd minute, Galway’s Wilson Waweru netted the equaliser to give the sides a share of the points.

It was a particularly big night for Marc Ludden who, having left Galway after seven seasons with his hometown club, now plays for Treaty and had his first visit to Deacy Park since his departure during the offseason.

“I’m disappointed, I thought we came here and played really well we had a good game plan and we frustrated Galway,” the defender said, speaking to Extratime.com.

“To be coming off the pitch against a full time outfit disappointed just shows how well we’ve done over the last few weeks but to concede in the 93rd minute it hurts. We’re disappointed but we have to move on.”

Despite the result, the Limerick side definitely appeared to be enjoying their football on Friday night and they didn’t look like a side that was quickly put together right before the season, as was the case for the side’s inaugural season in the League of Ireland.

“We’ve just clicked, the Athlone game in pre-season, we did well against them and we got a bit of confidence and that carried over to the Bray game,” Ludden explained.

“The Bray game was ugly, it was really ugly, but we were solid and we got that point.

“I think then people realised that we belong here, we can do well, just keep progressing. With the work we’re doing and trying to play more football, because we have a solid back four and back six, more football will come.

“The first-half, tonight, we showed that we can play ball, the second half they sort of went long and we were pushed back a bit.

“We would have bitten your hand off to take a 1-1 before the game so it is testament to the work Tommy [Barrett] has done that we come out with a draw and are disappointed.”

Ludden was named Extratime.com Player of the Match on Friday night and he was a key component in the Limerick side’s goal with the left back drilling an excellent cross on to the head of McCarthy.

After so many years lining out for the Tribesmen it was a strange experience for the Galway native.

“It’s bittersweet for me as I played for Galway for seven years, it’s my club,” he said.

“Bar tonight, I want Galway to win the League and I want the lads to do well, I know them for so many years.

“It was nice to get but I just wish Galway United the best of luck for the season and I hope they do it, I think they just need a win to relieve that pressure and then they’ll plough on hopefully.

“I nearly walked into the home dressing room, I haven’t been in the old dressing rooms since I was 13 or 14 playing for Galway Town.

"It was weird, and I was getting a lot of texts asking how I was feeling and all that but look, you just have to be as professional as you can be.

“It’s a weird feeling but I thought I did well, I was happy with my own performance.

“There’s no ill feeling between myself and Galway United or anything like that. I want to keep playing football and Treaty signed me and I’m happy I’m doing a job with them.”