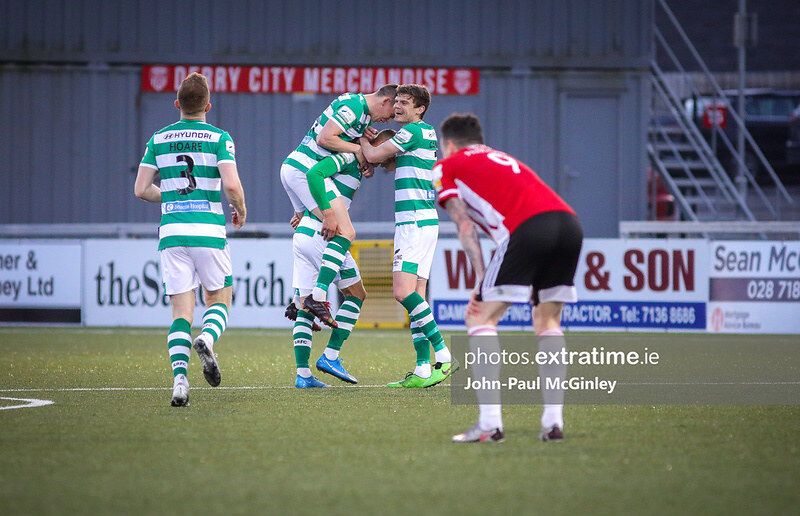 It felt finally that Shamrock Rovers got their season going with a 2-0 win at the Brandywell with Derry City probably wishing they could restart their campaign again as they now have suffered four defeats from four.

Rovers got their first clean sheet of the league campaign and their second win of the season which came thanks to first half goals from Rory Gaffney and an amazing strike from half way off the left boot of Graham Burke.

The Candystripes went close 17 minutes in when David Parkhouse pounced on a mix up at the back to lob Alan Mannus only for his effort to clip off the post.

The Hoops got the opener on 34 minutes when Rory Gaffney grabbed his second goal in four days. It came after a fine passing move involving Sean Gannon and Gary O’Neill.

When Graham Burke’s shot was pushed away by Nathan Gartside, Gaffney managed to slot it home from an acute angle.

Rovers doubled their lead five minutes later with an outrageous Burke shot from the half way line. The Hoops had broken down a City attack with Liam Scales clearing towards Danny Mandroiu.

The ex-Bohs man chested the ball to Burke who held off two Candystripe players and as he stepped into the Derry half he drilled the ball over the top of Gartside’s head for an incredible goal.

The Hoops were comfortable in the second half with none of the late goal concessions that they have suffered in their previous three games of the season.

The result stretched Rovers’ unbeaten record in the league to 26 games as the win moved the Hoops into third place above Sligo Rovers on goal difference just two points off the top of the table.

Shelbourne boss Ian Morris: 'I think we still have a couple of gears to go up' https://t.co/8jbbrLL64b pic.twitter.com/E1XYbVKEzF